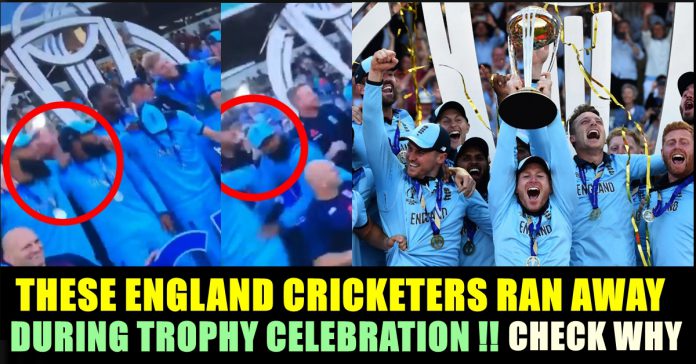 In a dramatic world cup finals which was played by England and New Zealand, Team England announced as the winners by ICC as they scored more boundaries comparing to New Zealand. Cricket is considered as the real winners at the end of the day as it saw the best match ever in the 45 years of World cup history.

After winning the trophy for the first time, England team rejoiced in excitement. As a part trophy ceremony, after receiving the trophy, players of England pulled out those champagne bottles only to spray it out in joy. Meanwhile two muslim players of the team, Moeen Ali and Adil Rashid who were seen celebrating with their teammates ran away as soon as witnessing the Champagne bottle.

Yes, they ran away from a World cup winning celebration which was won by their team for the very first time. Both the players avoided Champagne as alcohol is prohibited in Muslim religion. The players joined the team after the celebration ran out of champagne. The whole act from both the players captured in camera.

As soon as the video got surfaced, Fans of social media couldn’t stop reacting. Check out some of the reactions here :

Funny thing is, how hard it is, to believe that some people just don’t drink!

well done to them sticking to their beliefs. top blokes, top players

This is really very funny, someone need to explain them that champagne is not acid😂

That his choice,What he loves What he hates its all his choice of freedom