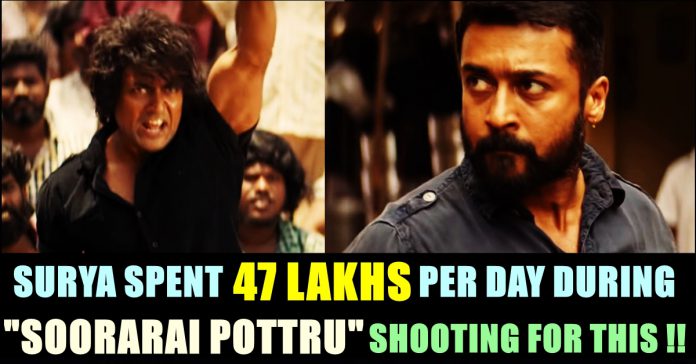 The teaser of Suriya’s “Soorarai Pottru” released on internet few days back and impressed the audience for its content. The one minute eighteen seconds long teaser shows Suriya in three different looks. It is widely believed that the film is a biographical picture of Air Deccan founder G.R Gopinath. It is notable that Gopinath is a retired Captain of the Indian Army, an author, and a politician.

The teaser which garnered 7 million views so far starts with the voice over of Nedumaran Rajangam, played by Suriya. The intense cuts shows us the struggle of the youngster who desires to own an airline company. Being directed by Sudha Kongara who stunned the audience with her “Irudhi Chuttru”, the film was produced by Suriya himself under his 2D entertainments.

In a recent interview with Vikatan, Sudha Kongara shared how this idea of her turned out to be a feature film. Before Irudhi Suttru, Sudha made a movie named as “Drohi” as her debut during which she thought of making a biographical picture on G.R Gopinath’s life story. In the interview, Sudha Kongara said that she would visit actor Suriya’s house for every Raksha Bandhan to tie him a rakhi. “When I visited him last year, he inquired me about my current projects and asked me if i have any story for him. At that time I had a 44 pages of this script which I wrote from the various sources I collected regarding the life events of G.R Gopinath. I gave it to Suriya and asked him to read it. After one month I received a positive response from him. After finishing our respective projects, we started making Soorarai Pottru” said Sudha Kongara who went on to add how Suriya became a producer of her third Tamil film.

“After finishing “Kaapaan” Suriya attended the photoshoot of “Soorarai Pottru” with a well built body. I said to him that there is no need for such physique in the film. He reduced his weight before the start of the shooting. We just have to inform Suriya what we need, he will take care of the rest” lauded the filmmaker who said that the film was supposed to be produced by someone else initially.

“I thought of pitching this story to a producer but Suriya came in to produce it on his own. He wanted no one to question me on the film’s expenses and didn’t like any producer to force me to add commercial elements in the film.” said the 48 year old filmmaker.

“One day rent for a flight is 47 lakhs. We shot with such flight for several days. Suriya didn’t hesitate to spend money. While filming with a mass hero like Suriya, we tend to add mass elements in a movie. Suriya could have demanded me five songs and four fights. But he didn’t. Luckily this script itself had mass elements” said Sudha Kongara in her interview.

The promising filmmaker sounds very confident and the film’s teaser has raised the eyebrows of the fans for its originality. Let us hope this film to be a break for Suriya who has been desperately searching for it for a long time.

Previous articlePopular Director Described This Heroine As A Mix Of Simran & Trisha !!
Next article“I Felt Bad When They Removed My Film” – Mahesh Babu !!

Steps From The Super Hit Song Of Vijay Was An Utter Copy From Shahid’s Song??

After vice president Mahendran and many other administrators of Makkal Needhi Maiam party, two more prominent officials announced that they are leaving the party....