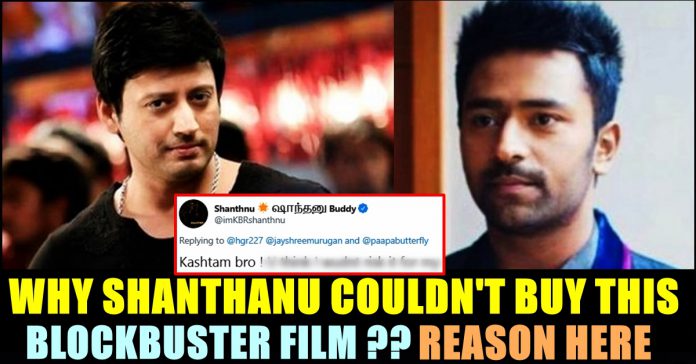 Why Shanthanu Couldn’t Get The Remake Rights Of This Blockbuster Film ??

“Master” starring Vijay is not only expected to be a breakthrough for director Lokesh Kanagaraj, but to everyone who are associated with the project, including Shanthanu Bhagyaraj, a young actor who is in desperate need of a huge break in his acting career. Being an excellent dancer and decent actor, Shanthanu is still searching for one big break for his acting career which spans more than 10 years. He got debuted through Sakkarakatti which was released in 2008.

Born to veteran filmmaker Bhagyaraj and former actress Poornima, Shanthanu also acted as child artist in his father’s movie “Vettiya Madichu Kattu”. Shanthanu is very much interactive with his followers in the mictor blogging social media site. Having more than 13 lakh followers in Twitter, the actor is a darling of Vijay fans in twitter as he is himself an ardent fan of the actor.

Apart from “Master”, Shanthanu is all set to appear in “Vaanam Kottatum” and “Raavana Kottam”. Recently, in a conversation with fans that took place in twitter, Shanthanu revealed that he tried so hard to buy remake rights of a blockbuster bollywood film buy failed to succeed in it. It all started when a twitter user asked her followers to comment about other language films which they want to remake in their own language.

One of her follower tagged Shanthanu and said that he want to remake bollywood film Badhai Ho by having Shanthanu and Bhagyaraj in father and son role. Check out the tweet here :

This tweet grabbed the attention Shanthanu who immediately replied by saying that he loved the film and the choice would be perfect.

I loved the film ! Wud be perfect 😊

Followed by this, one more user said that she want to see Shanthanu in the role of Ayushman Khuranna’s role in Andhadhun. She wrote “Thalaaaa!! The role of Aakash in #Andhadhun will be too good!! 🤩🤩🙈”. To this tweet, Shanthanu replied by saying taht he tried to get the rights of the film but the pricing is too high. Check out his tweet here :

Tried those rights too 😊 pricing is too high ! No point 😊

One more user insisted Shanthanu to buy the remake rights of the film and said that the film will be a big break for him if it gets a release after Master. Shanthanu said that he tried too hard to get it but it was beyond risk.

Here’s the reply of the actor :

Kashtam bro ! U think I wudnt risk it for my career ? Try pannen ! Beyond risk

Andhadhun was recently in the news for winning three National Awards including Best Actor, Best Adapted Screenplay and Best Feature Film in Hindi. The film opened to rave reviews from critics and audiences alike when it hit screens last year.

The film’s remake rights is now belongs to yesteryear actor-producer Thiagarajan and his son Prashanth is going to reprise the role of Ayushman Khuranna. Mohan Raja who is known for his works such as Thani Oruvan, Velaikkaaran is going to direct the film. It is notable that Prashanth already remade Sriram Raghavan’s Johnny Gaddar as Johnny in tamil which turned out as a huge flop at box office. (Also read : Actor Prasanna Indirectly Mocked Prashanth For Grabbing “Andhadhun” Remake Rights !!)

WATCH : Top Heroines Got Stunned On Seeing This Unseen Video Of Samantha !!