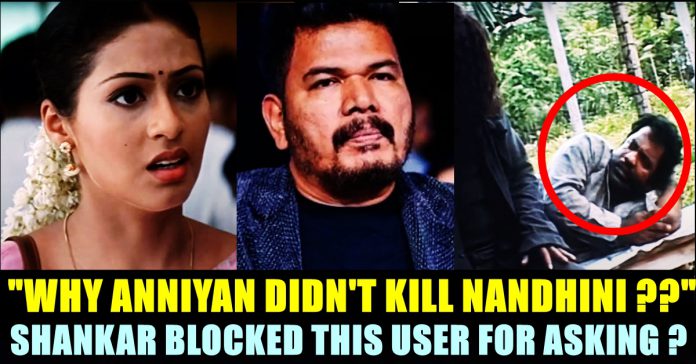 Director Shankar’s blockbuster film Anniyan recently streamed in Sun TV as a 9 AM show. As the entire state is in lockdown, the film garnered a huge viewership which was evident through the number of posts surfaced in social media platforms during the film’s telecast. The film was watched by so many people that even as hashtag “Anniyan On Sun TV” trended in Twitter.

Check out some of the posts surfaced under the hashtag :

#Anniyan will always be the Best Movie of Shankar 🔥 #AnniyanOnSunTV pic.twitter.com/8jsL9xZPDt

Pain can Either Destroy you are
Or Make you Stronger. #chiyaan pain and struggle gives a success to him #AnniyanOnSunTV pic.twitter.com/UDfxXX4mJs

The film which was released in 2005 had actor Vikram and Sadha in the lead roles. The film marked Kollywood’s first film based on multiple personality disorder, followed by several films in Hollywood. Vikram proved his versatility through this film in which he was required to portray three roles Anniyan, Ambi and Remo. The film was made of an expensive budget at its time and became South India’s most expensive film ever made.

The story of the film revolves around a law abiding citizen Ambi who is displeased with the corruption filled society, develops two other identities to fulfill his requirements without his knowledge. Anniyan, a man who kills people who are not obeying the law and Remo, a fashion model who makes Ambi’s love interest to fall in love with him. Actors Sadha, Nedumudi Venu, Vivek, Prakash Raj, and Nassar played important roles in the film.

The film became a huge success financially and praised by critics as well. Along with the theatrical success, the film won eight Filmfare Awards and six State Film Awards. It also won a National Award in the Special Effects category. Now, after watching the film in Sun TV, one of a fan came up with a meme questioning director Shankar about the film.

The fan’s meme questioned director Shankar on why he didn’t make Anniyan to kill Nandhini (played by Sadha) who involves in tax evasion but made him kill a man who sleeps in a park. The meme further accused the filmmaker for romanticising “Brahminism” as Nandhini belongs to Brahmin caste in the film.

Among all the posts, this meme went viral among the users of the micro blogging social media site. It garnered several reactions and many mentioned the filmmaker’s original Twitter account in the comment section which made him to block the user who posted it.

The Twitter user posted the screenshot and expressed his displeasure on getting blocked by Shankar.

Being a renowned filmmaker of Indian cinema, Shankar is not only known for making films that are on par with Hollywood films, but also for making socially responsible films. Mudhalvan, Indian, Sivaji are primary examples for his works. How do you see this accusation on him ?? Comment your views on this tweet and Shankar’s reaction to it !!