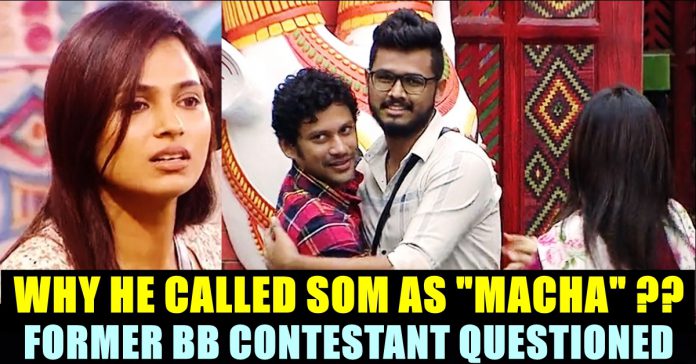 Ramya Pandiyan’s brother Parasu Pandiyan entered the house first as made her happy. When he entered the house, except Ramya Pandiyan, almost all the other contestants were in “freeze” mode and Parasu greeted all of them. After meeting Shivani and Balaji Murugadoss, Parasu met Som and said “Hi Macha, How are you?” before hugging him.

On seeing this, Danny who is known for acting in films such as “Itharku Thaane aasai pattai Balakumara”, “Yaamirukka bayame”, “Polladhavan” uploaded a story in his Instagram account asking why he called Som as “Macha”. “Why Ramya brother called Som, hi macha !'” Danny’s Instagram story read.

Many other viewers of the show questioned the same and posted tweets in the micro blogging social media platform.

I liked when #Ramya brother #Parusu called #Som as Hai Macha… Very nice and positive vibes from all the three families today… #Ramya and Family, #Rio and family, #Som and family… Loved them…

The reality game show functions based on the votes of the audience. A contestant who gets less number of votes from the audience would be evicted each week. Ramya Pandiyan, Shivani Narayanan, Ajeedh, Gabriella, Somashekar are the nominated contestants for this week.

Janany of Bigg Boss season 6 is trending in the micro blogging social media site after crying over Vikraman's statement over her being dependent...