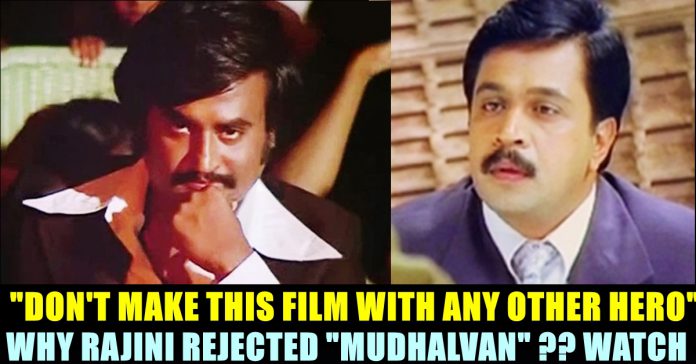 “Mudhalvan” is one of the most important films in the career of director Shankar. The film’s unique narrative structure impressed the audience of Tamil cinema and the film became a huge hit during its release time. The film also acted a s a huge break in the acting career of “Action King” Arjun.

Ever since the film released in 1999, talks doing rounds saying that the film was supposed to be done by Supertsar Rajinikanth. People also believe that Vijay got an opportunity to act as a lead in the film. Now, Shankar’s assistant director Muthu Vadugu who worked with him in several films has revealed why both the actors missed the golden opportunity of acting in the film in one of his recent interactions with a private youtube channel.

After initially rejecting the offer, Pugazh agrees and exhibits grit and determination through the single day he was provided and his actions collapses the actual cabinet. A fresh elections are held where state voters eventually elect him to be their new official Chief Minister. The subsequent unpopularity and jealousy that the old Chief Minister goes through results in him taking revenge on Pugazh. The film ends with Pugazh winning the battle with his sheer intelligence.

Till today, fans of actor Rajinikanth are regretting for the missed opportunity. Now, in an interaction with Turing Talkies youtube channel, assistant of director Shankar Muthu Vadugu has revealed that Rajinikanth didn’t reject the film but asked Shankar to wait. He also said that they couldn’t cast Vijay due to remuneration issues.

Muthu Vadugu said that the film was written for Rajinikanth. “He listened to the story and liked it. He also wanted to act as a lead but situation didn’t allow him. Reason behind his reluctance is, he supported DMK leader Kalaingar and the party won the election. At that time, it was just 6 months since the election. Rajinikanth didn’t want to do a film which criticizes the Chief minister at that time. He asked Shankar not to do the film with any other actor and promised to do it after the change of regime” Muthu Vadugu revealed.

Muthu also expressed his admiration towards Superstar Rajinikanth for the way he rejected the film. Further, while talking about why Vijay couldn’t do the film, Muthu said that the film was Shankar’s own production and a remuneration issue took place between Vijay and filmmaker.

The film enjoyed positive critical acclaim and emerged as one of the top grossing Tamil films of 1999. The film ran for over 100 days in theaters and won awards on a regional scale. The film was then dubbed and released in Telugu as Oke Okkadu which was also successful and later remade in Hindi as Nayak (2001) starring Anil Kapoor.

Previous article44 Year Old Pragathi Gave Back To A Guy Who Trolled Her Fitness Video !!
Next articleSj Surya’s Reply To The “Ramasamy” Controversy Caused Hilarious Reactions !!

Ace filmmaker Gautham Vasudev Menon came up with an important message to Varun, protagonist of one of his upcoming films which is titled "Joshua-...

Ever Witnessed Vignesh Shivan In This Tamil Film As Hero’s Friend ??

Right from legendary filmmaker Bhagyaraj to epitome of grandeur Shankar, we have seen many filmmakers appearing as junior artist in the films they worked...