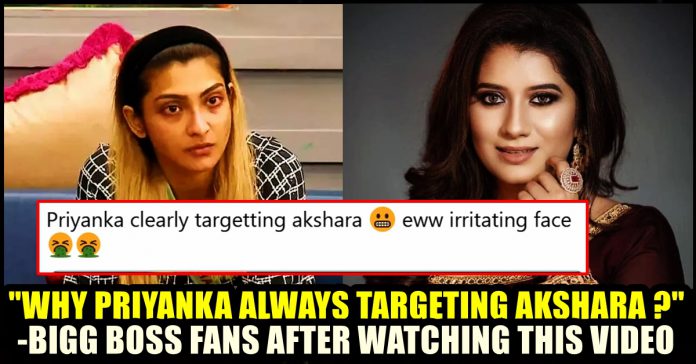 After seeing one of the recent promos of Bigg Boss show, fans has been questioning why Priyanka is constantly targeting Akshara Reddy since the inaugural episode. A number of fans claimed that the TV host is insecure about the potential fan base the model could gain in future. Many other reactions on the same is flooding the social media platforms as well.

Having Ulaganaayagan Kamal Haasan as host for one more time, season 5 of Bigg Boss show started streaming recently. Showing the newly renovated house, Kamal addressed the audience who were appeared in person this time in the auditorium, unlike the two previous seasons. He introduced the participants one by one by asking them tell about their profession, personal interests etc. In the inaugural episode which streamed for 6 plus hours, singing and dancing performances of the participants were also took place to entertain the audience, along with the contestants giving self introductions.

Namitha Marithu, during her narration, walked audience through the hardship she went through as a transgender. Despite of all the odds, she managed to become a prominent model and requested parents to provide education to their LGBTQ children. Her speech won hearts with her co-contestants providing hearts. Now, to our shock, reports emerged saying that she walked out of the show in her own will.

For the past two weeks, a task named “oru kadha sollatumaa” is being conducted inside the bigg boss house and the contestants has been telling the story about their personal life to their co-contestants and audience. Now, in a recent promo, Bigg Boss ordered the contestants to name the least to best contestants of the week.

While following his words, Priyanka could be seen naming Akshara Reddy as a weak performer. She says Akshara is getting absconded among the crowd by being inactive.

Ardent followers of the show who are watching it since very long time, claimed that Priyanka is targeting Akshara as she sees her a strong performer. “Priyanka is undoubtedly an amazing entertainer ♥️. But she fears Akshara and Pavani will have a great Army outside which May distrust her victory” a follower said in his/her tweet whereas another one said “is #Priyanka insecure about #Akshara !? i dont really feel or even watched an episode where #Akshara being that lousy! Dear #PriyankaDeshpande do not preach something which you cannot justify!”

Why #Priyanka is always targeting #Akshara…?

Priyanka is undoubtedly an amazing entertainer ♥️. She knows how to patch up with Camera without noting that playing thrilling games.
But she fears Akshara and Pavani will have a great Army outside which May distrust her victory #BiggBossTamil5

Priyanka team unitedly gave dislike to #AksharaReddy . She campaigned against akshara with every contestant in #BB house.priyanka may give comedy content but she is negative person.

is #Priyanka insecure about #Akshara !? i dont really feel or even watched an episode where #Akshara being that lousy! Dear #PriyankaDeshpande do not preach something which you cannot justify! #BiggBossTamil5 #BiggBossTamil

This priyanka is so jealous of akshara. What does she mean by saying askhara has no drive. Akshara won international pageant. It's not a easy thing. Priyanka questioned Raju giving akshara like for her story. Priyanka is jealous soul. #BiggBoss5Tamil

Previous article“This Will Help You Look At People Without Their Clothes” – Man Sold Normal Cooling Glass For Rs. 1 Lakh At Theni
Next articlePopular Movie Reviewer Raised Voice Against Theatres For Not Allowing Visitors Outside To Eat !!

CK Kumaravel Of Naturals Salon Demands Govt. To Refund 50% Of GST He Paid !!

CK Kumaravel, CEO of naturals salon demands the government to refund the 50% of GST he paid last year to pay salary for his...

With the entire country celebrating the achievements of the female athletes in the Tokyo Olympics that got completed recently, a bizarre decision of dropping...