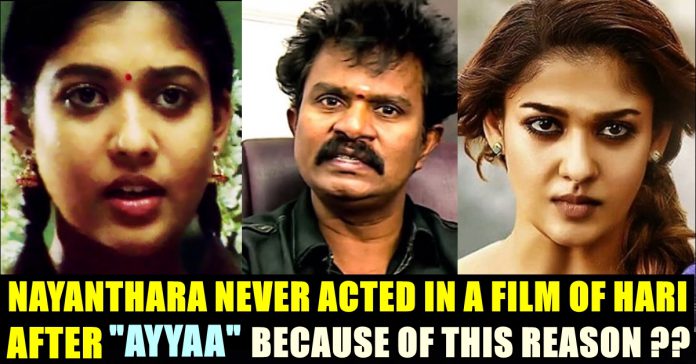 Nayanthara, a skillful actress who has always been a director’s actress, didn’t collaborate with director Hari after he helped her to make her debut in Tamil film industry through “Ayyaa”. The actress who never hesitated to join hands with the directors with whom she already collaborated, never did a film with Hari, director of her first film.

With director P. Vasu, Nayanthara did Chandramukhi and Kuselan. Vishnu Vardhan casted the actress in Aarambam as main female lead after working with her in Billa. She accepted to act in A.R Murugadoss’s “Darbar”, after doing a minor role in his film Ghajini. Rajesh gave two films with Nayanthara namely “Boss engira Baskaran” and “Mr.Local”. Director Atlee who did a major role in her come back, did “Raja Rani” and “Bigil” with her. Vignesh Shivan, her fiance, has committed her in his upcoming film “Kaathu Vaakula Rendu Kaadhal” after “Naanum Rowdy Thaan”. This left a fan to raise a question on why she never acted in a film of director Hari who is known for his commercial blockbusters.

Director Hari, while selecting artists for his upcoming film “Aiyaa”, was searching for a girl with “homely look” to cast in his film. Not satisfied with the heroines he was shown, Hari approached PRO Johnson and asked him to find a girl by saying the requirements. Johnson shared about the requirement to his friend Ajay, a Kerala based reporter who worked for “Nana” film magazine. Ajay sent the pictures of Nayanthara to Johnson. The pictures of the actress were captured when she gave an interview to that magazine after acting in a couple of films in Malayalam.

Director Hari who saw the photographs of Nayanthara, selected her to do the role in his Sarath kumar-starrer. The editor of “Nana” magazine who is a lady, suggested Nayanthara to act in Hari’s film instead of acting in a Malayalam film in which Nayan was about to commit. Nayanthara got the blessings of the editor and reached Chennai to act in the film.

Generally, debut actresses from Mumbai, Bangalore would be brought through flights by the production houses in film industry. But Nayanthara came from Kerala to Chennai in a government bus with her mother and father. They reached Koyambedu bus stand at the wee hours. PRO Johnson received the actress in Koyambedu bus stand and accommodated her in a hotel in Vadapalani.

Now, the movie journalists of Valaipechu youtube channel, has revealed why the actress and director never joined hands after “Aiyaa”. They said that the way Nayanthara behaved during the shooting of “Aiyaa” led to a small rift between the actress and the filmmaker.

“Nayanthara who reached Chennai in a humble way to act in the film, started making demands after half of the film’s shooting was done. During a song’s shooting, Nayanthara was asked by director Hari to wear a costume and the actress refused to do it. At one point, she even decided to leave the film.” said Bismi, one of the journalist. “These kind of incidents would have made Hari to think that Nayanthara might demand more now as she is receiving Rs.5 crore as salary” he added.

After acting in “Ayya”, Nayanthara got the opportunity to pair with superstar rajinikanth in “Chandramukhi”. The actress, further paired with several heroes and took a break from film industry after finding herself amidst a number controversies. However, she gave her come back through “Raja Rani” and started her second innings only to gain the tag “Lady Super star”. She was the only South Indian female actor to have made it to the Forbes India Celebrity 100 2018 list, with her total earning credited at ₹ 15.17 crores.

Previous articleRekha’s First Post After Getting Eliminated From BIGG BOSS Show !!
Next articleVanitha Vijayakumar Sent Peter Paul Out Of Her House ?? Producer Reveals

Celebrity couple Virat Kohli and Anushka Sharma made the biggest announcement of their entire life. The couple announced that they are pregnant and are...

Senior actress Kasthuri who is pretty much vocal in her social media handles about the current affairs of our country, is getting trolled by...