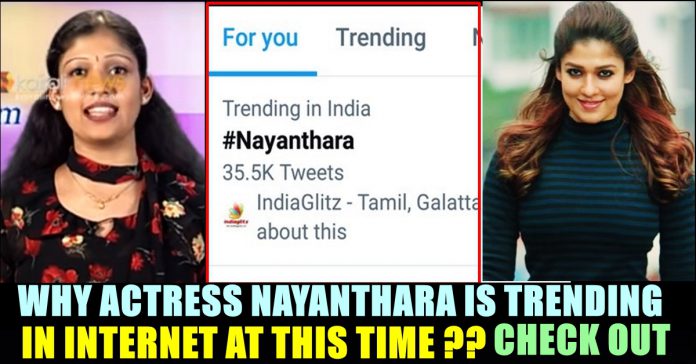 At this pandemic situation, actress Nayanthara’s name is trending in twitter with thousands of tweets. Most probably Nayanthara is the only active heroine to have a tag in front of her screen name similar to the top heroes of Indian film industry. Fans of the actress fondly call her as “Lady Superstar” as she is the sole survivor in the South Indian film industry among those who got debuted in the year 2003 as heroine.

Nayanthara is one of the very few female actors who rules Tamil film industry for more than 15 years. Being the highest paid actresses of South Indian film industry, Nayanthara is also the only actress who manages to act in both female centric movies and hero oriented movies. The surprising fact about it is that the “Bigil” actress shines in both the regions. Since the 21 days lockdown announcement from Prime Minister, highest paid actors are donating their part to both public people and to the people who are associated with their own industry.

Superstar Rajinikanth announced Rs.50 lakh for the Film Employees Federation of South India workers. FEFSI has more than 20 unions, consisting more than 25,000 workers film technicians from different branches of filmmaking such as lightmen, makeup artists, choreographers, dancers, stunt persons, junior artists and others. Actors Sivakarthikeyan, Vijay sethupathi, Suriya donated Rs.10 lakh each for the people who are suffering from their industry. Vijay Sethupathi also announced a big amount to help them.

Now, Nayanthara’s name is trending in Internet because of her generous gesture towards the FEFSI workers. The actress decided to donate Rs.20 lakhs for her industry people. So far Nayanthara is one of the two actresses who came forward to help the daily wagers of their industry. Aishwarya Rajesh is the other actress who expressed her generosity by donating Rs.1 lakh to the industry workers.

For this kind gesture, FEFSI president R.K Selvamani, thanked the actress through a press release. “For helping the daily wagers at this critical situation, we, FEFSI organisation, thanking our sister Nayanthara for her love and affection towards the workers” the statement of FEFSI read.

Meanwhile, the one more reason behind Nayanthara’s name trending in Internet is, that today is the 12th year anniversary of her film “Yaradi Nee Mohini” which gained her widespread acclaim among the fans of tamil cinema. That film is the first collaboration between Nayanthara and Dhanush who later collaborated in “Naanum Rowdy Thaan” as producer and heroine. The film turned out to be blockbuster and considered as Nayanthara’s “Come Back” in Tamil cinema. It is also notable that Nayanthara happened to meet the love of her life through “NRD”.

Check out some of the posts of 12 years of Yaradi Nee Mohini below :

Comment your views on this generous gesture of the talented actress !!

Bengaluru Man Pressed The Back Of A 20 Y/O Girl On Flight !! SHOCKING !!

A 28-year-old passenger has been arrested for allegedly molesting a female flight attendant on board a Bengaluru-bound IndiGo plane before its departure from the...

Varmaa is the Tamil remake of the Telugu film Arjun Reddy and is produced by Mukesh Mehta under E4 Entertainment. It is directed by...