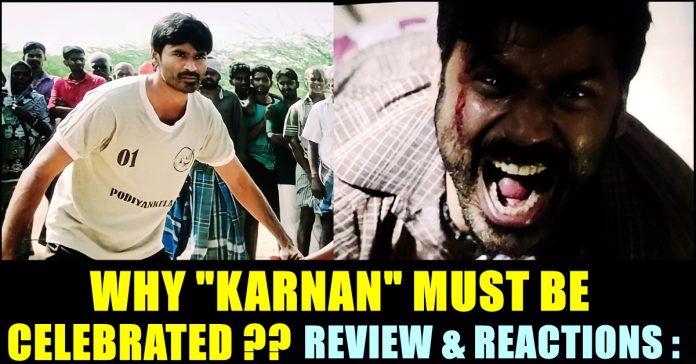 Why “Karnan” Must Be Celebrated ?? Review & Reactions :

The most awaited film of Dhanush and Mari Selvaraj’s “Karnan” released in the theatres today and left the fans of Tamil cinema talking about it. Bankrolled by Kalaipuli S. Dhanu, the film’s music was composed by Santhosh Narayanan and the camera, edit works were done by Theni Eashwar and Selva RK respectively. “Natti” aka Natarajan, Yogi Babu, Lal, Rajisha Vijayan, Gouri G Kishan, Lakshmi Priya and others played prominent supporting roles in the film with Dhanush playing the titular character.

The film’s plot revolves around a fearless youngster fighting against the influential people who are oppressing his people through various ways. The period film which is set in the suburbs of Tirunelveli district, talks about the struggles faced by the people who belong to a small village named “Podiyankulam”. One of the main problems which acts as a barrier for the growth of “Podiyankulam” residents is the absence of government buses and a bus stop. It is reported that the film is made based on the Manjolai riots of 1999 and 1997 Melavalavu massacre.

Dhanush who played “Karnan” in the film, fights for the rights of his village in his own way and the climax relies on whether he bought justice to his people or not. Dhanush’s acting as “Karnan” is going to gain him awards and accolades. Mari Selvaraj has proved him once again after “Pariyerum Perumaal” and the metaphors, semiotics he used throughout the film is going to be the talking point in Internet for the next 10 days at least.

Santhosh Narayanan, with his BGM and songs, left the fans in awe whereas Theni Eswar, through his work, gave us the feel of living in mid 90s. Supporting actors including Lal, Lakshmi Priya, Yogi babu and the people who acted as the villagers has delivered top notch performances by grasping the vision of the filmmaker.

One of the major set backs of the film is the wrong Lip sync of the prominent characters in the important situations of the film. In many scenes, characters are not saying what they are actually saying and it gave us a feel whether we are watching an other language film which is dubbed to Tamil. Dhanush’s attachment with any of the characters in the film didn’t work well as we couldn’t connect with the relationship he had with Rajisha Vijayan, Lal, his parents or any of the villagers. Even the rift between himself with “Kannapiran” played by Natti didn’t create the impact it was supposed to.

However, the film must be celebrated and is the need of the hour without any doubt as it is still relevant despite of being a period film that is set on mid 90s. A discussion and debate over “Karnan” must take place among the public which would help the current generation to know about what kind of oppression people went through in the past. Overwhelming responses from all the directions of Internet are pouring for the film.

5 stars for #Karnan. The hype is real. Extremely powerful, haunting drama about class divide and fighting for one’s identity. By the end of the film, you’re left shaken from the inside. You’re left speechless. @mari_selvaraj and @Dhanush give us a film to remember for years.

.@mari_selvaraj creates a very strong visual imagery using metaphors. @dhanushkraja is one of the very few heroes who submits himself to the vision of the director.

The story is caught in a loop. Waiting to witness more.

What an asset @Music_Santhosh is. #Karnan

#Karnan is an artisanal delight, the sort of film that re-establishes your faith in cinema. The setting, its narrative journey & the dramatic tension charged with intent, full of symbolism, mercilessly communicates the oppression & the resistance with powerful imagery!
EPIC 💙💙 pic.twitter.com/j0hi4PYcFP

Previous articleParvathy Replied To Haters Who Criticized For The Way She Interviewed Maari Selvaraj !!
Next article“Blue Satta” Maaran’s Movie Got Banned By Censor Board For This Reason ??

Sexual Harassment is one of the major issues prevalent all over the world. News about physical abuse appears every day on our screens. In...

During the promotions for his upcoming film "Liger", young and emerging hero Vijay Devarakonda who is being considered as one of the bankable stars...