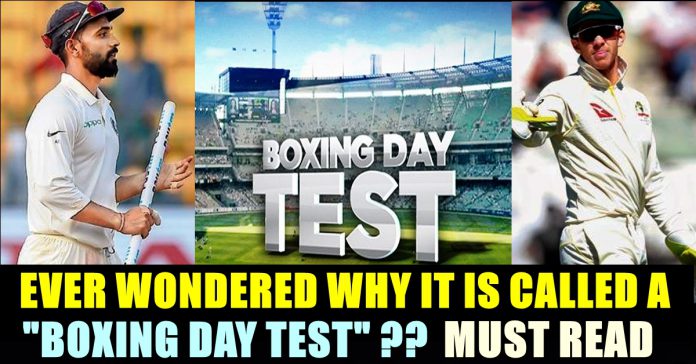 India and Australia are facing each other at the Melbourne Cricket Ground for the second test. Without captain Virat Kohli, Team India has a biggest challenge ahead of them to face after the humiliating loss against the home team in the first test. Led by Ajinkya Rahane, India made four changes in their playing 11. Shubman Gill, Rishabh Pant, Ravindra Jadeja and Mohammed Siraj got included into the team to face the mighty Aussies.

Apart from the non-inclusion of KL Rahul in the playing 11, what many of the fans wondered about is, why it is called a “Boxing Day test match”. Cricket matches that are typically held of 26th of December is called as “Boxing Day Test” and the practice is being followed in Common wealth nations such as Australia, South Africa and New zealand. The most popular one takes place in Australia’s Melbourne cricket ground.

Among the many, the important reasons behind why it is being called as “Boxing day” is because alms or gift boxes are traditionally opened in churches on that day. The other reason is that servants are given presents on December 26 to celebrate the Christmas festival.

Apart from India vs Australia test match, the Boxing day is going to witness New zealand hosting Pakistan and South Africa welcoming Sri lanka. While talking about the speciality of “Boxing Day test”, Indian prominent spinner Ravichandran Ashwin who bowled exceptionally well in the first innings of the first test, in his youtube channel, had said that it is a rare tradition that is being followed at MCG and pointed out that Chennai Chepauk stadium forgot the tradition of Pongal test.

“It is a day celebrated by our Christian friends. They would put their gifts into boxes and would share them to children and friends. Earlier, owners provided gifts to their employees by boxing them. In fact, Boxing day sales would take place during this season where people could buy things in discount.” the cricketer said.

He further stated that MCG is still following the tradition of conducting Boxing day test match though many countries stopped doing it. “I still remember the das where Pongal test would take place in Chepauk. They used to start the match by keeping sugarcane behind the stump. But the practice is not being followed now” Ash expressed his regret.

Actress Kiran caught the attention of social activists and news portals after charging money from her followers through a private app to chat with...