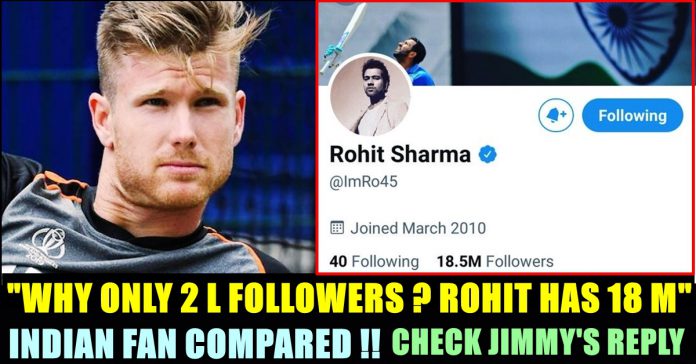 Neesham was picked by IPL franchise Delhi Daredevils for IPL 7. The next year, he was picked by the Kolkata Knight Riders for IPL 8, but did not play a single match for them due to injury and was dropped from the squad the very next season. In the 2020 IPL auction, he was bought by the Kings XI Punjab ahead of the 2020 Indian Premier League.[7] In February 2021, Neesham was bought by the Mumbai Indians in the IPL auction ahead of the 2021 Indian Premier League.

On Thursday, the cricketer changed his twitter profile picture and received a comment from a fan from India regarding his followers count. “Why do you have only 236K followers?” asked the Abhishek through his comment.

Why do you have only 236K followers?

Without getting offended by the tweet of the fan, the cricketer, in a witty manner, said that he thought it was quite a lot. “I thought that was quite a lot?” he wrote in his tweet with a laughing emoji.

I thought that was quite a lot? 😂 https://t.co/9q7zWPagQm

Abhishek didn’t stop there as he went to compare the followers count of Neesham with his IPL captain Rohit. “Your @mipaltan captain has a few more” he wrote in his tweet showing the screen shot of Rohit’s 18 m followers.

Jimmy’s reply to this comparison garnered him 7 K likes from the users of Twitter. “Kiwis only deal in per capita stats thanks” he wrote and laughed.

Kiwis only deal in per capita stats thanks 😁 https://t.co/UnhQE0DmRv

This reply from him made fans to begin crazy calculations of who between Rohit and Jimmy had more followers per capita with fans churning out statistics on India and New Zealand population.

Almost 30% of His followers must be Indian while NZlanders don't follow their own cricketers forget what they gonna follow anyone else. His tweet doesn't make sense.

In an incident that had everyone puzzled, the ball went missing during the game Wednesday between Royal Challengers Bangalore and Kings XI Punjab. That...