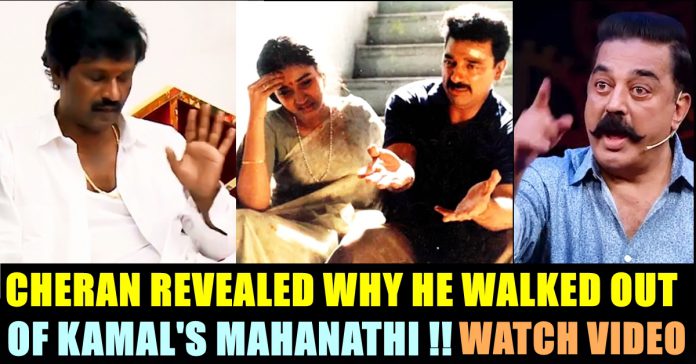 Cheran, the four time national award winner for his filmmaking skills, surprisingly participated in Bigg Boss house and shocked everyone by lasting in the game show for 91 long days. The last film he helmed was ‘Thirumanam’ which released earlier this year. The show which was hosted by Ulaganayagan Kamal Haasan, was won by Mugen Rao, a Malaysian model and singer.

During the show, Kamal Haasan has mentioned that Cheran worked with himself earlier. The Bigg Boss host even mentioned that Cheran walked out of the project mid way due to opinion difference. The project they worked together in the film “Mahanathi”, a 1994 family drama. The film portrays the grief of a humble villager who sees his family and property being ruined. The film deals with several issues such as corruption and child trafficking.

Now in a recent interaction with a famous youtube channel, Cheran has revealed the reason behind his decision to walk out from the project. Cheran said that he only regrets due to the decision he made. The actor/director revealed that he awes Kamal Haasan as a filmmaker and actor who has an eye for details.

Cheran who worked as an assistant director in “Mahanathi” says that he only realized after 15 years that he made a mistake by walking out of the film. “The film”Guna”, made a heavy impact in me and I watched it 3 times consecutively. After watching it, I decided to work with Kamal Haasan at least once in my lifetime. As I was working with K.S Ravikumar as assistant director, I got an opportunity to work with Kamal Haasan in “Mahanadhi” movie through Santhana Bharathi.” said Cheran in the interview.

“Starting from reading the script, I was admiring the work of Kamal Haasan in that particular movie. However, a difference in opinion took place at one point. Our direction team consisted six to seven members and if any one of them makes a mistake, the whole direction team was supposed to take the blame. Being a perfectionist, Kamal Haasan would expect us to be the same. When he planned to shoot a scene on a particular day, he couldn’t do it and we (direction team) became one of the main reason. Then we decided to walk off the film and at that time we felt bad for the way Kamal Haasan handled us but after becoming a filmmaker myself I realized how he would have felt on that day” said Cheran in the interview.

In the later part of the interview, Cheran revealed how he and Kamal became normal after that dispute. He also shared about his upcoming projects, including about the one with Vijay Sethupathi. ” I am following Vijay Sethupathi for three long years and have narrated the script to him. I am looking forward to work with him in near future” said Cheran in the interview.

This Teacher Praised Pakistan & Posted It On Social Media !! Check What Happened To Her !!

A woman teacher of a private school in Karnataka has been arrested for allegedly hailing Pakistan in the backdrop of the terror attack in...