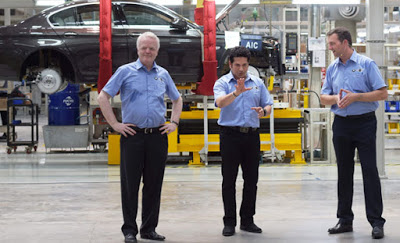 Detroit city in Michigan State, USA is known as the world’s traditional automotive center. The city is a major hub for economic activity and all the major companies related to the auto industry have established their bases in Detroit. In India, Chennai having become the manufacturing hub from all the big automotive companies like GM, Ford and Chrysler has been labeled as Detroit of India. The city accounts for 60% of the country’s automotive exports. Chennai’s location near to the coast makes it easy to export parts/products through the sea route covering entire South-East Asian region. Here are some facts that enabled Chennai to earn the name of being ‘Detroit of India’.

4. Base to all Big Auto Names

Tamil Nadu has created much supporting infrastructure at its 113 industrial parks that has attracted many large corporations to set up shop in Chennai and other cities. Several of these parks offer ready to use plots which attract foreign capital investment. From sporting bikes, luxury cars, large Lorries to battle-tanks, every type of vehicle is made in Chennai. Karur district is a nerve center for building bus bodies (outer structure from metal sheet) and the Namakkal city is a hub of lorry body building industry. Indian automobile majors like Mahindra, Ashok Leyland, Royal Enfield and MRF etc. have recently invested in Chennai for building new manufacturing facilities to boost production. Apart from Indian auto giants, major companies like Hyundai, BMW, Renault-Nissan and Ford have plants in the city.

Chennai zone alone contributes 39% to the state GDP and auto industry make huge contribution into it. Auto industries large presence has earned Chennai a nickname ‘Detroit of India’. Chennai forms 35% of the country’s automobile component industry. A number of tyre manufacturing companies have invested 90% capital in the Chennai corridor out of the planned $5 billion investment in Tamil Nadu. Agencies like CII (Confederation of Indian industry) and ACMA (Auto Component Manufacturers Association) constantly works for the development of auto industry in the region. City rarely witnesses any strikes related to labour or payment issues and the government lend full support to resolve any critical issues. All such developments have made Chennai as a favorite among investors and a hotspot in manufacturing auto items.

3. Hub to Electronics and Software sector

Telecommunication giants like Nokia (in the year 2006), Samsung, Dell, Nokia, Foxconn and Motorola have established manufacturing hubs in Chennai. Electronics Products including printed circuit boards (PCBs) are manufactured and Chennai plants are not acting as mere assembly units.

The city has also emerged as the second largest exporter of software related products and ITES (IT enabled services) in India. Major software companies such as Cognizant, TCS, Wipro, HCL, IBM and Hewlett-Packard have corporate offices around Chennai.

With a spur in industrial activities, health related risks are bound to increase. Chennai offers world-class medical facilities through a chain of government as well as privately owned hospitals.

The city’s affordable cost for treatment attracts about 45% of foreign and near about 40% of domestic health tourists. The city is also known as ‘India’s health capital’.

Being home to several MNC’s adds to the woes of traffic congestion during the mornings and evening rush hours in Chennai. A well connected road network almost connects the entire region. Southern Railway, headquartered at Chennai, provides much needed urban transport facilities for a working population. The Chennai Mofussil Bus Terminus (CMBT) is a modern, well equipped terminal that has an ISO 9001:2000 quality certification.

Metro train is planned to be tested on the elevated corridor in the month of February, 2014 by the CMRL (Chennai Metro Rail). Metro will get rid of the enormous traffic on the roads and provide rapid transport system to Chennai Metropolis. Chennai International Airport is third busiest airport in India in terms of passenger traffic. The Airport is witnessing a passenger growth of 18% over the last few years. Air cargo services from the airport provide an option of fast and reliable delivery of industrial freight. The seaport in Chennai is developed as an artificial harbour for handling containers. The volume of cargo at this port is growing enormously every year.