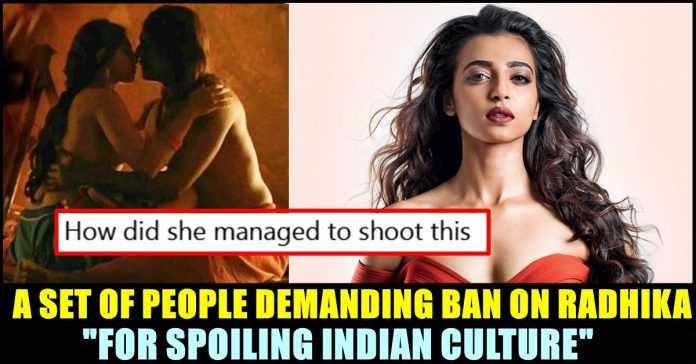 Hashtag “Boycott Radhika Apte” is trending in the micro blogging social media site since the morning of Friday. It has been reported that a number of Internet users got offended with the scenes performed by Radhika in her films such as “Parched”, “Hunterr” etc. They believe that the actress is ruining the culture of country India and demanding a permanent ban for her in the Indian film industry.

Most of the people who are trending the hashtag have national flag in their handle name. Some of the twitter users also trending the hashtag to express their anger over Bollywood celebrities keeping mum about the case of Raj kundra, husband of actress Shilpa Shetty who got arrested for producing pornography films and distributing them through a moblie application.

However, the main reason behind the trend of the hashtag is about the actress performing in scenes that they believe as obscene ones. Radhika Apte is one of the busiest actress in Indian film industry. She acted across India and known among Tamil audience for her appearance in Rajinikanth’s Kabali movie which was directed by Pa. Ranjith. Apte has spoken out against sexual harassment in the Indian film industry.

“Radhika Apte is going against ‘Indian culture’. a twitter user said whereas another one added a pictur eof one of Radhika Apte’s films and said “Shame On Bollywood. Bollywood is destroying Indian Culture”

When it comes to Kathua entire #Bollywood gang was with Placard
Why these people silent on #RajKundra ?
Habit of bollywood to defame degrad our culture #BoycottRadhikaApte pic.twitter.com/icQ3Kp1TIi#BoycottRadhikaApte

Bollywood always targets the ancient religion and traditions of Bharat.#BoycottRadhikaApte

How did she managed to shoot this

Everything is in ur hand but still u want Govt to act on every issue which u consider as relevant.

How many of U came forward to :-

1. Unsubscribe all OTT Platforms.
2. Boycott each and every Bollywood Movie.
3. File an FIR against Directors of Anti Hindu#BoycottRadhikaApte pic.twitter.com/Tz8t8wEtXb

Bollywood was first to hold placard for Kathua case to defame hindus,

WE WILL NOT TOLERATE ANYTHING WHICH GOES AGAINST OUR CULTURE 🚩 #BoycottRadhikaApte

PROTECTING OUR CULTURE IS NEED OF HOUR 🚩

Their movies are so bad that I can’t even put a photo video.

Radhika Apte, known for her work in films like AndhaDhun, Phobia, Ahalya and the web-series Sacred Games, said earlier in an interview with news agency IANS, “I am very comfortable doing intimate scenes. For an actor, scenes having intimacy or performing any kind of scenes, is a part of the job.” “I have been brought up watching world cinema and I have travelled a lot so I am very comfortable with my body. I have seen people performing nude on stage in India and abroad.” she added.

Kohli Had To Stand On Block To Match Height With 20 Year Female Player !! Check out The Reactions !!

Virat Kohli is one of the fittest Indian sportspersons and a pride of the country. The Indian cricketer always tries to give his best...