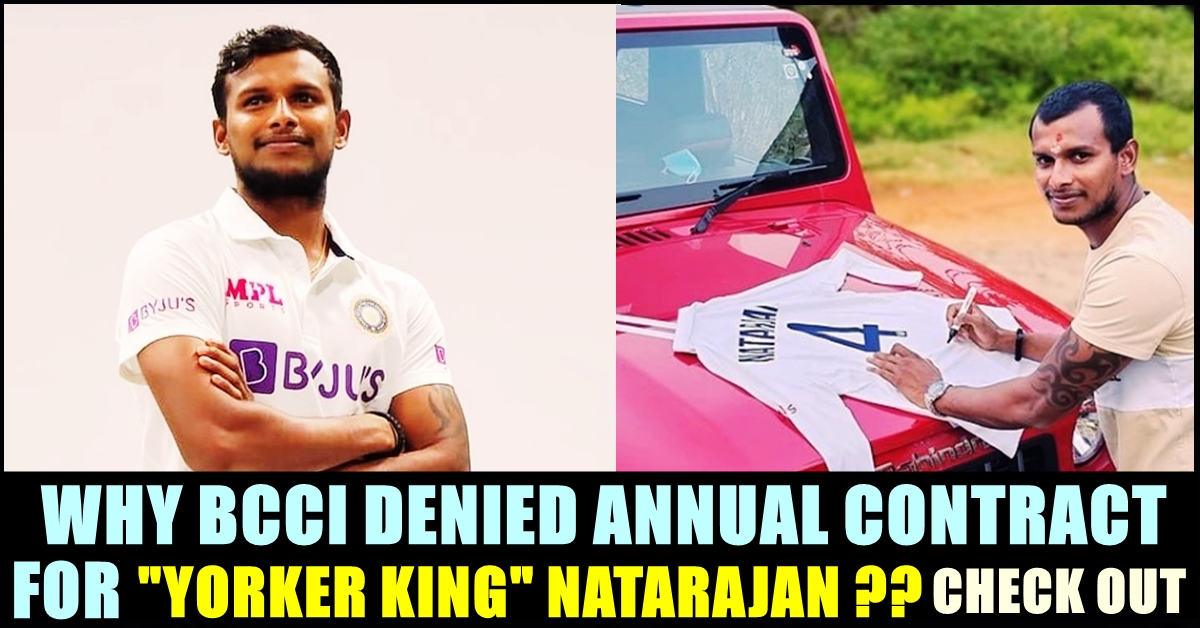 On Thursday, The Board of control for cricket in India has announced the Annual Player contracts for Team India for the period from October 2020 to September 2021. According to the press release of BCCI, the payment structures has been divided into four categories with Grade A+ contract earning players ₹7 crore, Grade A earning players ₹5 crore, Grade B earning players ₹3 crore, and Grade C earning players ₹1 crore for the aforementioned time period. Surprisingly, Thangarasu Natarajan from Tamil nadu who is fondly called as “Yorker King” failed to make it to get the annual contract and reason behind the BCCI’s decision is out.

As soon as the report surfaced, people in social media started raising question on why T Natarajan who played well in the Australian tour was denied an annual contract. It has been reported that the cricketer is yet to to claim the eligibility to get an annual contract from BCCI, according to the rules.

Nattu has appeared in only one test match, two ODIs and Four T20s which doesn’t meet the criteria of BCCI. However, the 29 year old looks promising and is expected to represent the national team in several more matches in the near future. Currently, the Salem express is representing Sunrisers Hyderabad in IPL tournament and the team is yet to mark their first victory.

Thangarasu Natarajan became an irreplaceable assert of team India as he proved himself in the 4 matches he played in the Australian tour. The left arm pacer from Salem, Tamil nadu has grabbed a separate place in the team through his outstanding performance in the T20 series. He picked 6 wickets in the three matches he played with an economy below 7 runs per over which impressed critics and fans.

Cricket experts and fans highly believe that Natarajan is an excellent find of IPL 2020 and started comparing him with the legendary left hand seamer of India, Zaheer Khan. Nattu is expected to replace him by improving his abilities. He who came from a poor background, is finally seeing the light of the day through his sheer hard work and consistency.

When Vivekh Gave His Entire Payment To Actor Kumarimuthu !! MUST WATCH
Gaby Replied To People Who Commented On Her Ripped Jeans !!