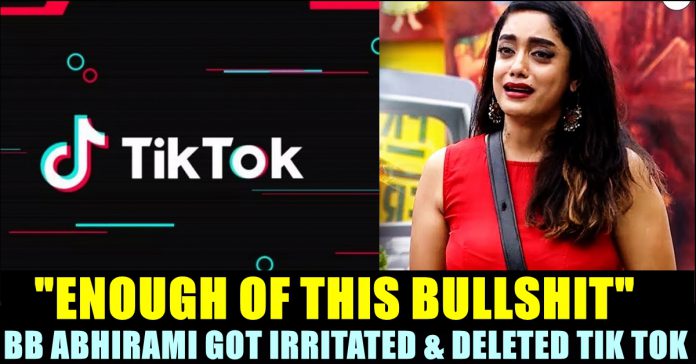 But there are one kind of fans who would fakely create accounts of celebrities to gain more number of followers to their accounts. Celebrities such as Nayanthara, Ajithkumar are not having an account in any platform of social media platform but fake accounts of them are still existing which will be posting their updates like an official account.

The recent one to become the victim of this fake profiles is Bigg Boss star Abhirami Venkatachalam. The model is known for appearing in actor Ajith Kumar’s “Nerkonda Paarvai” but she gained wide attention only through Bigg Boss show. Recently, she tried to have an account in Tik Tok, a micro video posting social media platform. But due to the arrival of enormous number of fake accounts, she happened to delete her account.

In her second story, she posted a picture of a guy and wrote “This useless piece of shit”

She also posted screenshot of one more fake account :

Abhirami said that she is facing such issue for the second time after Twitter. She said that has account only in Insta and added that she would get out of it soon due to frustration. “Had enough with Everyone” she wrote.

Abhirami Venkatachalam has a separate fan base in Instagram where there are so many Instagram accounts which only runs to support her. But she is having a hard time due to these fake profiles it seems. Comment your views on this struggle faced by the Bigg Boss star !!

Previous articleNot Shankar Or A.R Murugadoss, This Young Director Is Getting The Highest Pay !!
Next articleMadhuvanti Came Up With A Clarification For Her Blunder !! WATCH

Mugen Rao appeared in social media for the first time after the demise of his father Prakash Rao. The 52 year old man died...

Tamilnadu based Indian cricketer Ravichandran Ashwin's savage reply to a fan of Rohit Sharma who tried to pull his leg, is trending in the...

Pictures of the Pooja event of actor Vijay's upcoming film which is tentatively titled as "Thalapathy 65" are doing rounds in social media platforms...