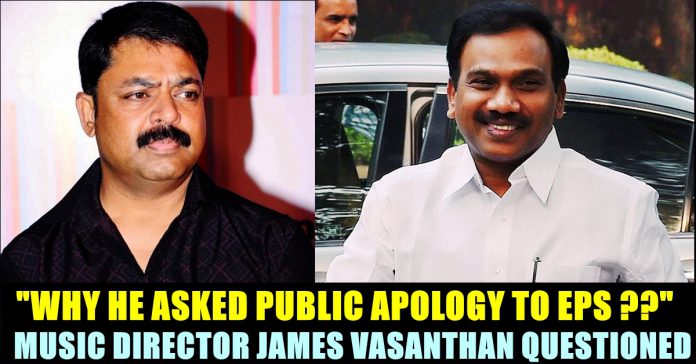 Music director James Vasanthan who rose to fame among Tamil audience by composing music for blockbuster film “Subramaniyapuram”, recently grabbed headlines for the opinions he stated regarding the season 4 of Bigg Boss reality game show. Now, a comment he made about the controversy of A.Raja’s derogatory speech about Chief minister Edappadi K Pazhaniswamy has grabbed the attention of the netizens.

DMK’s #ARaja being a constant…..!!! pic.twitter.com/MhBksTpvp6

Members of various women organisations have lashed out at A.Raja for the way he made his public speech. The way he disrespected a Chief minister has made public and the observers of Tamil nadu politics angry, says reports. “It once again proves that DMK is a party against women” said public, according to a report.

Political analysts have alleged that the members of DMK are making such cheap comments due to the frustration of grabbing the governance. A tweet from the official twitter account of DMK leader Kanimozhi surfaced saying that no one will be spared if they make offensive comment about women.

As soon as the speech of A.Raja broke out on news outlets, A video of chief minister Edappadi K Pazhaniswamy shedding tears in front of people is trending in the social media platforms. On Monday, A. Raja made a public apology for hurting the sentiments of the Chief minister. “I was distressed to read in media reports that the Chief Minister had been hurt by my words. It was taken out of context, misunderstood but I express regret from the bottom of my heart. Further, I would say that if it is not for political reasons but even otherwise if he is feeling hurt, then I have no hesitancy to seek a heartfelt apology,” he said.

Now, music director James Vasanthan came up with a Facebook post asking why A.Raja made a public apology. “Why A.Raja gathered a press meet and asked apology to Edappadi ?? It was unnecessary. Doesn’t he know what he spoke ?? He could have clarified his speech in court of they slaps a case on him” said James in his post.

James believed that A.Raja’s speech is a “figurative speech” on ADMK and BJP’s relationship. “Entire Tamil nadu knows the Tamil knowledge of Edappadi.” said James and pointed out the errors he made in the past. He said that the speech of A.Raja was misinterpreted. “Why he asked apology and made it look like a mistake ??” he questioned. “Majority people who doesn’t know about the issue would think that A. Raja has made a mistake” he added.

Further he also uploaded a post saying that intellectual and educated people like A. Raja should refrain making such personal comments as it would affect the party he belongs and would act as a bad example for young generation.

A hashtag saying "அன்றே சொன்ன ரஜினி" is being trended by the fans of the actor in Twitter since past two days. It is a...