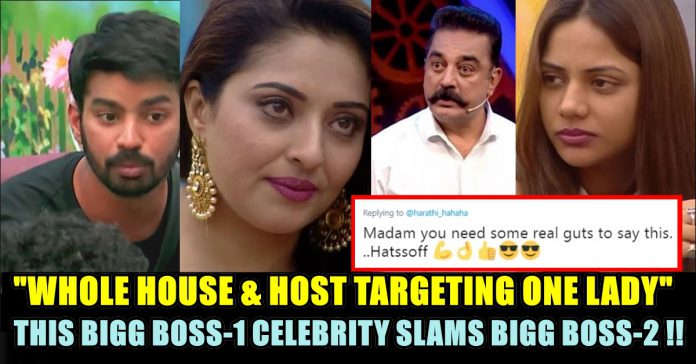 “Whole House & Host Targets This One Lady !! Why ??” This Season 1 Contestant Lashes Out On Season 2 BIGG BOSS !!

Kamal Haasan was unsurprised as Vaishnavi was evicted from the Bigg Boss Tamil house. The episode began with contestants speaking about each other’s strategy. Riythvika was considered the fairest when it came to her observations about other contenders while Daniel was seen as one with a strategy to win the game. After Saturday’s episode when Yaashika didn’t stand up for her friends, other housemates concluded that she was a scheming, cold hearted person. 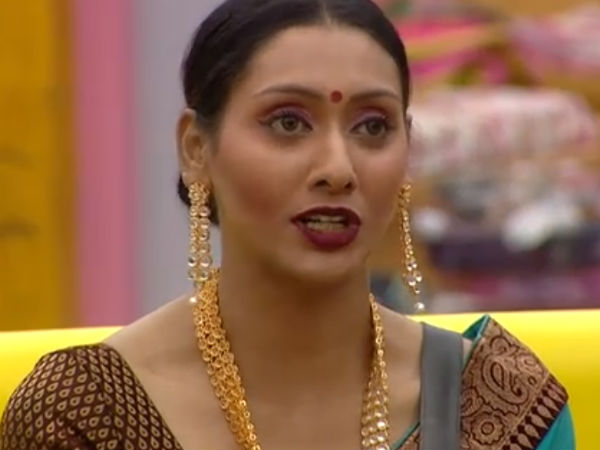 Meanwhile Actress Harathi one of the contestant of BIGG BOSS season 1 criticized on Kamal Hasan’s hosting and every other contestants attitude towards Mumtaz. As it is evident that Mahat and Aishwarya accused Mumtaz for no particular reason in Sunday night’s episode. She says “Mahat & Aishwarya are saying that it is scary seeing Mumtaz praying. what is there to scare ? which would scare for prayers ?? Whole house and host targets one lady ? It is wrong stopping someone who is willing to go. Send out Aishu & Balaji. They panicked in big time after the opening the door !!”

On seeing her tweet so many of her followers replied her. Here’s some of them :

Y she can’t say that she is best performer. It was her idea to steal the money and stick it to the case.coz of which rithvika was not able to steal the money.she controlled mahat whenever he went against rules.she also stitched most of the dolls.

She did fair supervision of the opposite team dolls.Also every one has the right to stand up for themselves. It is a game not some social activity to sacrifice for others.also she didn’t argue over it .it is just a opinion she kept and went with the majority.

Everyone will have a situation were they will be selfish. No one is saint here.I’m just saying that Mumtaz didn’t do a big crime to be cornered like this in the house.Mahat and Aishwarya who are self boasting that they are righteous are the biggest hypocrites in the whole house.

Agreed Mahat and Aish not great but they are not deliberately targeting her they feel she is an actor and they are giving their reason clearly.
Why Mumtaz asked Y to nominate J when she is speaking nicely to J. That s clear hypocrisy.

Ur guts to share ur thought is geniune . We known that it fans of Kamal sir me too. But truth is truth. @vijaytelevision giving false information to him I think

Yes.. actually we have to learn many things from her pic.twitter.com/wn5zK2KeBt

I like ur honest most of the time kamal not asking anything mahat using pombala pombala . And hurting words no comments from kamal

Bollywood actor Sonu Sood, in an interaction with a media channel had said revealed how South Indian Superstar Chiranjeevi refused to hit him while...

Lokesh Kanagaraj, director of Vijay's most awaited upcoming film "Master" has appeared in an interview to promote the film for the first time. The...