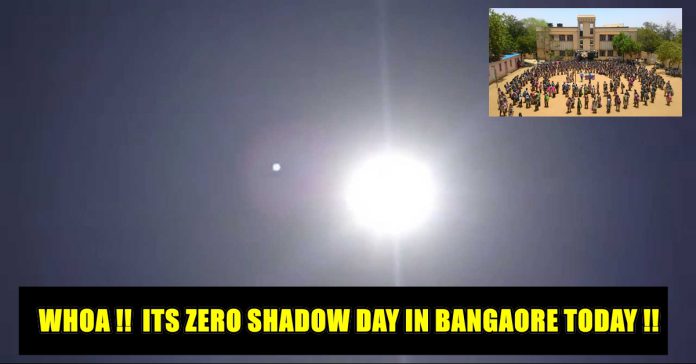 This phenomenon – called the No Shadow Day – is witnessed when the sun is exactly overhead. It takes place only twice a year and today is one of the day in Bangalore.

“To observe this phenomenon, you can stand or place a vertical object in the sun close to noon, and you will see the shadow getting shorter and shorter, and eventually disappear, only to reappear later,” says an expert about Zero Shadow day. “If we observe the sunrise (& sunset), we see its position shifting over the horizon day by day northwards from December 21, and then southwards from June 21. In India we call this Uttarayan and Dakshinayan,” the expert added.

“Between these two limits, the sunrays fall vertical on different latitudes on different dates. And on these dates, those living on that particular latitude will see their shadow disappear when the sun is right over head. Mathematically, it should be one particular day – but one can ‘see’ the zero shadow a day before or after,” he said. The Earth’s axis is tilted at 23.5 degrees. As a result, at no point in the day is the sun exactly overhead—except on April 24 at noon at Bengaluru’s latitude. All other days, despite what we learn by rote, all objects do cast a shadow even at noon.

To celebrate Zero Shadow Day, Jawaharlal Nehru Planetarium, Bengaluru has organised a half-day workshop in association with Jawahar Planetarium, Allahabad and Aryabhat Foundation, Bhopal. In attendance will be school children between grades eight and twelve. They will get to learn the practical aspects of observing zero shadow with various exhibits. They will learn various concepts like rotation and revolution of the earth, importance of specific latitudes, measurement of local time and the calculation of the circumference of Earth from shadows. At each latitude, there are two days in a year when the sun is exactly at the zenith. The next Zero Shadow Day in Bengaluru will be August 18.

In a violent game which crowns the person who stands the last, also gives space for people to make love it seems. The game...