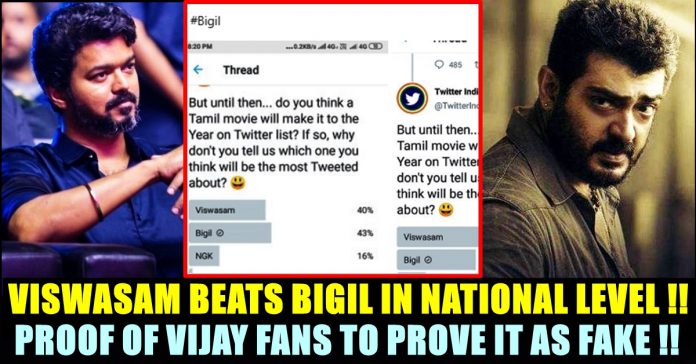 A picture of Ajith-Nayanthara starrer Viswasam topping the lost of Twitter’s most influential moments of 2019 went viral in social media recently. Followed by that the official account of Twitter India said that it is just a representation of some influential moments of the year and asked followers to wait a little more to know about the official list.

The tweet of Twitter India said “We are excited that you’re excited about this Tweet, but this is just a representation of some influential moments this year. You’ll have to wait a little longer for our official Year on Twitter list to see which moments were the most Tweeted about in 2019”

We are excited that you're excited about this Tweet, but this is just a representation of some influential moments this year. You'll have to wait a little longer for our official Year on Twitter list to see which moments were the most Tweeted about in 2019 https://t.co/ws2N63TPKL

Further Twitter India added another tweet conducting a poll between Vijay’s Bigil, Ajith’s Viswasam and Surya’s NGK by asking the Tamil cinema fans about which movie they think that it would make it to the top of Twitter’s most influential moment of the year.

The poll took place for 24 long hours and received a total of 255,288 votes. Initially Bigil seemed to win the poll by large margin all day. However, Viswasam took over it in the final few minutes and declared as the winner with 44% of votes. Bigil managed to get 40% of votes and ended up in the second place whereas Surya’s NGK received 14 % of votes.

Check out the poll results below :

But until then… do you think a Tamil movie will make it to the Year on Twitter list? If so, why don't you tell us which one you think will be the most Tweeted about? 😃

After seeing the result dejected Vijay fans got upset and accused the fans of actor Ajith for using bots to win the poll in final moments. Bot is nothing but a automated designed program which acts as an individual in online. Many of the Vijay fans produced proof of the number of votes increasing in large number in a minutes difference which they believe as not possible.

They produced two screenshots of the poll at 8.20 and 8.21 to prove how many votes has been increased within a minute. Check out both the screenshots below :

Within two minutes more than 13,000 votes has been registered and we can see Viswasam which is in the second place in the first screenshot, topping the list in the second screenshot.

Check out some of the tweets of Vijay fans :

What do you think on this accusation made by Vijay fans against Ajith fans ? Comment your views !!

Actor Vijay Sethupathi stretched his supportive hand to Suriya who release a press note regarding the speech of her wife in an award function....