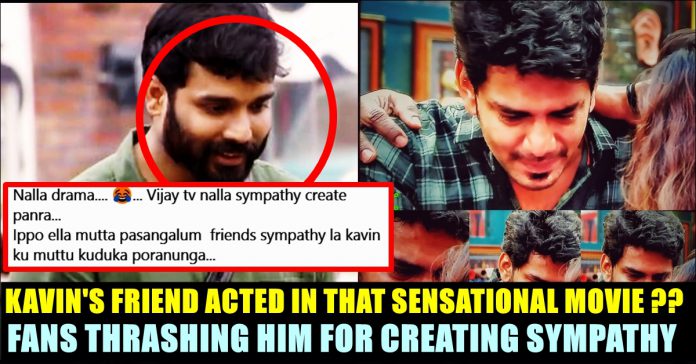 In this recent promo of Tamil Bigg Boss, Kavin’s friend Pradeep Antody entered the house on behalf of his family. In the promo he was seen giving a tight slap to Kavin for betraying the people who belongs to him.

Pradeep Antony is one who acted in a film called as “Aruvi”. He did a role of “PETER” in the movie. He played a character of an assistant director of a reality show “Solvathellam Sathyam”. In the film he agrees to telecast the lead’s problem and calls three men for interrogation and his character was loved by the audience.

However, fans of the show are alleging that he is trying to gain sympathy for Kavin by slapping as he earned major hatred for his behaviour inside the house. When Losliya’s father entered the house, Kavin who cried his heart out and said that he would not developed his relationship with Losliya if he knew about her father’s mindset already. This made the fans to troll him as he was not standing by a relationship he maintained.

Not only Kavin is manipulative

Sorry to say this

The slap is plainly scripted. In a show like #BiggBossTamil3 where violence s strictly not allowed.. BiggBoss himself asks Kavin to freeze for a moment and let his friend take advantage over the situation. Slow claps 👏. That manda mela ulla kondaiya marandha moment.. Sigh.

Lol, Got reminded of this scene in Ratsasan after seeing #Kavin's friend's well-orchestrated slap for getting sympathy. 🤣#BiggBossTamil3 pic.twitter.com/Z5CKbQLvQq

Kavin is one of the most controversial contestant in the Bigg Boss house. The actor who was approached in last season, decided to take part in this season as he was acting in a movie as protagonist at that time. However, the movie which was titled as “Natpuna Enna nu Theriyuma” release delayed for several reasons and went unnoticed.

After entering the Bigg Boss house, the actor grabbed the attention of media for his strategy of loving 4 girls at the same time to win the title and to keep the audience engaged. Though it looked funny initially, things turned ugly when he gave his word to Sakshi, one of the four female contestants. He also had something going between him and Losliya while talking with Sakshi.

A final year engineering student was arrested on Tuesday by the Egmore All Women’s Police for circulating obscene photos of girls he had befriended...