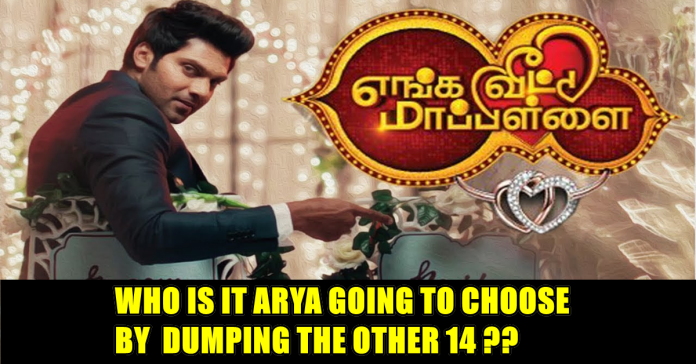 Who Is Arya’s Wife? Who Did He Choose By Dumping The Other 14.. Find Out Here!! As its grand finale day, there are lots of expectations from it. The channel telecasting this EVM show has released the promo video of the grand finale. In this, among the 3 girls, Arya is seen choosing his most preferred soulmate by presenting a grand token of love.

The family members of these could-be brides, actress Gayathrie Shankar, some other small screen stars and other VIPs are participating in this final episode. To sum it up, the suspense, that has been building up for quite some time, will come to end with the grand finale. [wp_ad_camp_1]
It is now evident that even Abarnathi is eliminated earlier in the contest, She is the winner of the show and heart of ever charming Arya.
Previous article10 Top Kollywood Actress’s Educational Qualification !! You Will Be Surprised To Know !!
Next articleSHOCKING : This CSK Player Sold Peanuts On The Road Side Once To Make Money !!

Though Raiza deleted her tweet about Bollywood actress Anushka Sharma holding her baby, screen shot of it are doing rounds in social media platforms...

We all should have wondered who could be the person lending voice for Bigg Boss at least once in these four years. There were...