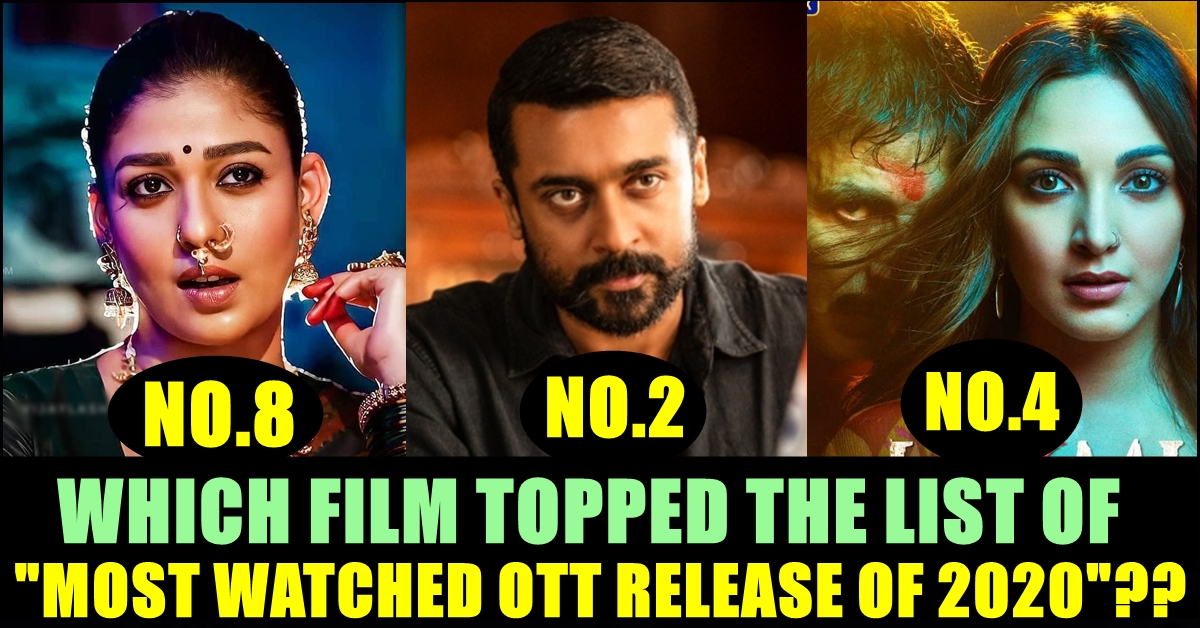 Releasing mainstream films directly on OTT platforms became a common practice among the makers of Indian film industry amidst the lockdwon situation. Initially, theatre owners opposed the decision and condemned actor Suriya who released his production venture directly on Amazon Prime. However, followed by “Ponmagal Vanthaal”, many other films started releasing directly on OTT platforms. Now, India’s top 10 list of most watched direct OTT released films has been released. Check out the list below :

A romantic thriller which has “Nan E” fame Naani as lead was directed by Mohankrishna Indraganthi. The Telugu film which got a direct release on Amazon Prime had actresses Nivetha Thomas, Aditi Rao Hydari as female leads.

The supernatural comedy drama was released on Disney plus Hotstar on Diwali day. Directed by RJ Balaji and NJ Saravanan, the film talked about how fake godmen are cheating public in the name of representing God. The film had Nayanthara in the titular role with RJ Balaji, Oorvasi, Smruthi Venkat in the supporting roles.

Thuppakki fame Vidyut Jammwal’s romantic action thriller “Khuda Hafiz” directly released on Disney plus hotstar. The film was directed by Faruk Kabir and was released on 14 of August this year.

With Jhanvi Kapoor playing the titular role, the biography drama was directed by Sharan Sharma. The film which was inspired from the real life of air force pilot Gunjan Saxena, was released on 12th of August. The film was released on Netflix.

Being an official remake of Tamil blockbuster horror flick “Kanchana”, the film was directed by Raghava Lawrence who helmed the original. Having Bollywood’s top-tier actor Akshay Kumar in the lead role, the film had Kiara Advani as female lead. It was released directly on Disney plus hotstar on 9th of November.

The film which is loosely based on the autobiography of captain G.R Gopinath, has actor Suriya in the lead role. Directed by Sudha Kongara, the film was produced by Suriya himself under his own banner. It got directly released on Amazon Prime on 12th of Novemeber.

Dil Bechara is an official remake of Hollywood emotional love drama Fault in our stars. The film has late actor Sushant Singh Rajput and Sanjana Sanghi in the lead role. The film became the most watched film of 2020 as far as the films that got direct OTT release are concerned.

On seeing his film grabbing a spot in the Top 10, director/actor RJ Balaji, uploaded a tweet writing “MookuthiAmman One of the top 10 most watched OTT release of the year” with heart emojis.

Yashika Aanand Opened On Her Relationship With Balaji Murugadoss For The First Time !!
Vijay TV Rakshan In Trouble ?? Shocking Report