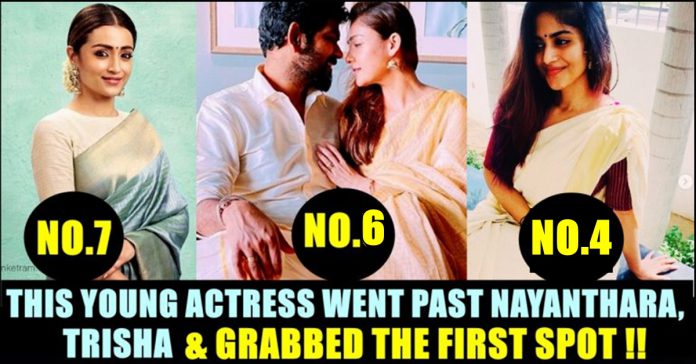 On the auspicious day of Onam which is predominantly celebrated in Kerala as a harvest festival is also celebrated to commemorate King Mahabali, whose spirit is said to visit Kerala at the time of Onam. Irrespective of religion, entire country would celebrate the holiday every year with the lavish Onam Sadhya (feast) and the Paayasam (rice pudding). But Onam is not just about food, the outfit also plays an imperative role in the completion of the day.

On the special day of 31st August, social media is flooded with pictures posted by celebrities acin the traditional look. Not only the Kerala based actresses, almost all the south Indian heroines slayed in their own way and the one who suffered are the fans who couldn’t handle it all in just one day. From Lady Superstar Nayanthara to Anikha Surendran, a budding heroine, many beauties impressed netizens with their Onam attire.

Now, let us have a look at the list of top 10 heroines who impressed the internet users based on the number of likes they garnered through their social media post on the auspicious “Onam day”.

The “Mariyaan” Panimalar who made her recent appearance in Tamil through Kamal Haasan’s “Uthama Villain” grabbed the 10th spot with 150k plus likes. The actress who is known for concentrating in performance oriented roles, has grabbed a spot despite being inactive in social media platforms. She even deactivated her account a couple of times recently and still managed to grab a spot in the list which is meant for the super active heroines.

The young actress who debuted through the parody sequel “Tamizh Padam 2” became an internet sensation due to the pictures she is uploading in her official Instagram account. Her “Onam Special post” received 1 lakh and 95 thousand likes through which she surpassed some of her competitors such as Raiza wilson, Aathmika etc.

The “Master” Malavika is yet to have a proper Tamil release yet won the hearts of the Internet users with her sizzling photoshoots. Her debut film “Petta” failed to give enough space for her to perform and she is expected to impress the mainstream audience through the most awaited “Master” in which she is going to pair up with the ever charming Vijay. Malavika’s Onam day post gained her the 8th spot with 2 lakh 32 thousand plus likes from the Instagram users.

Evergreen Trisha who is winning the hearts of Tamil cinema lovers for decades is in 7th spot with 2 lakh and 66 thousand plus likes. In her special Onam day post, Trisha was seen wearing the “Kasavu Saree” which is meant for the auspicious day.

The 35 year old actress who is fondly called as “Lady Super Star” by her fans doesn’t even have an official social media platform but managed to grab the main spot in the list. The Onam celebration posts Vignesh Shivan, her fiance, uploaded was the trending topic of the main day. The actress hired a private flight to reach her hometown amidst the COVID 19 crisis to celebrate the festival with her Mother and boyfriend. One of Wikki’s posts reached 3 lakh and 10 thousand plus likes which made her to occupy the 6th spot.

The young actress who is known for pairing up with Sivakarthikeyan in his recent film “Hero”, is a daughter of veteran filmmaker Priyadarshan. The 2 lakh and 86 thousand plus likes she gained through her Onam post got her the 6th spot.

A post shared by Kalyani Priyadarshan (@kalyanipriyadarshan) on Aug 31, 2020 at 2:47am PDT

Considered as the next big thing in the South Indian film industry, the 24 year old Megha Akash who was supposed debut through “Enai Nokki paayum Thotta” is impressing the fans with her looks. She is expected to win their hearts as a performer in near future. Her Onam post gained her the 3rd spot in the list with 3 lakh and 39 thousand plus likes.

Known for the adorable performance she gave in “Kaadhalum Kadanthu Pogum” as “Yaazhini”, Madonna is not getting the right roles she deserves it seems. In her Onam day pose, the actress was seen playing with a tree in a typical Onam attire. With 3 lakh and 60 thousand plus likes, the Kerala based actress is in the 3rd place.

A post shared by Madonna Sebastian (@madonnasebastianofficial) on Aug 31, 2020 at 4:55am PDT

Being the youngest in the list, Anupama surprised us by grabbing the 2nd spot in the “Onam festival” list. With the help of her 7.3 million followers, the “Premam” actress garnered 6 lakh and 50 thousand plus likes for one of her Onam posts to get the spot.

Yes. you read it right. Keerthy Suresh has won Nayanthara, Trisha and all the other actresses by a big margin and became number one. Through one of her six posts she uploaded in Instagram, Keerthi Suresh received 7 lakh and 77 thousand thousand likes and topped the list. The national award winning actress glowed in the pictures without much makeover.

Manjima Mohan, Raiza Wilson, Aathmika are some of the actresses who deserves a special mention in the list. Comment your favourite !!