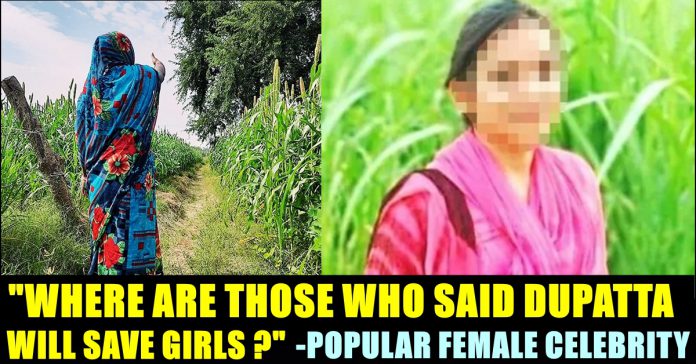 Entire country erupted seeking justice for the 19 year old Dalit girl who was sexually assaulted by four upper caste men. She succumbed to injuries in a hospital in Delhi in the early hours of Tuesday. The incident created huge outrage in the country as influential personalities such as Virat Kohli, Suresh Raina, Kangana Ranaut, Akshay Kumar voiced out for the victim and demanded immediate justice for her.

The girl went to collect animal fodder with her mother from a field on 14th of September. They went to cut grass in the field which belongs to the Thakur men who are considered as upper caste in India. She was cutting grass with her mother and brother not too far off in a field. The girl’s mother had hearing issues and her ears were stuffed with cotton balls due to pain.

After a while, when the brother went to fill water for the buffaloes, the victim who was wearing a Salwar kameez, dragged by her dupatta and was sexually assaulted by the four men. The mother who thought that her daughter would have left to home to drink water, called her name two times loudly and continued cutting grass. Only after seeing the mud traces and her daughter’s slippers near the house, the mother started looking for her daughters in the fields of Thakur men.

As the incident created several questions about the safety of women in our country, Singer Chinmayi raised a question through her official Instagram account. She shared a message asking where are those people who said that Dupatta will prevent all the rapes and harassment as the accused used the victim’s Dupatta to harm her.

“The girl was dragged and strangled using her own Dupatta. Where are those people who say Dupatta will prevent all the rapes and harassment” the message read.

This post from her created a discussion among her followers. A.r Rahman’s daughter Khatija Rahman lauded the question raised by the singer.

Comment your views on the question raised by the singer and the reactions her post is receiving !!