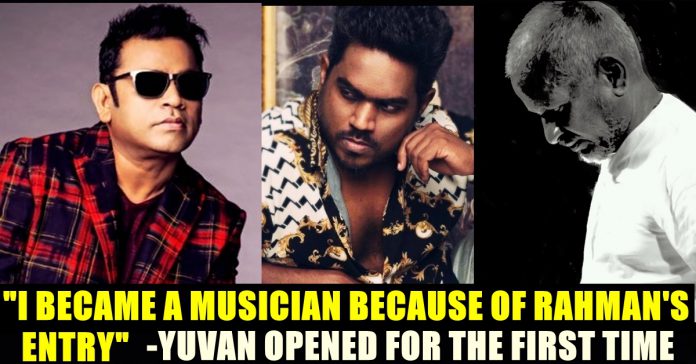 Yuvan Shankar Raja who is known for his music among the youngsters of Tamil nadu, celebrated his 42nd birthday on 31st of August with many top-tier celebrities attending his birthday party. Videos of Simbu and Dhanush singing and dancing to celebrate the birthday night of the youth icon did rounds in social media platforms. Thousands of Fans were sharing the pictures and videos of Yuvan and his songs to wish him on the special day as well. Meanwhile, a video shared by a fan which shows Yuvan explaining about why he entered music industry has garnered wide attention.

Yuvan Shankar Raja is one of the most influential music directors of Kollywood film industry. He who enjoys a fan base on par with a mass hero in Tamil film industry, never failed to disappoint them through his works. Being a son of legendary music director Ilayraaja, Yuvan started his career through Selvaraghavan’s “Thulluvadho Ilamai” after composing music for a film named “Aravindhan” when he was 16 years old.

Despite entering the industry with his father’s influence, the music director worked hard and gained a separate fan base for himself. He has composed music for more than 100 films in a span of 23 years of his musical career. He has acquired a huge loyal fan base for himself through his works. The forty two year old music composer is currently working on several projects and has turned as a film producer as well.

In the recent video that was shared to celebrate his birthday, Yuvan could be seen saying that he entered the music industry only to continue the legacy of his father. He also revealed that Oscar winner A.R Rahman as one of the reasons for his entry into the film industry. “I am going to share something that I never shared in any of the interviews” Yuvan started sharing about what made him to choose music as his career.

“In a way I should thank A.R Rahman. During my school days, there will be a hype for me as the son of Ilayaraja. Many would ask me about my father’s upcoming projects and I enjoyed a huge attention at that time. Slowly, I realized that the attention is diluting due to the emergence of A.R Rahman.” Yuvan Shankar raja said in the interview with Vikatan.

“A change of sound came from him. He created a new sound and audience got connected to him very well. During the period when by brother (Karthik Raaja) was composing music, a cousin came to me and said that Rahman is going to rule from then. He said “Ipo vanthu Rahman thaan. Ipo unga daddy ellam onnum kedyatathu” (Rahman is trending now. Your father is nothing hereafter) to me. He further mentioned about his albums and tried convincing me that Rahman is better than my father” Yuvan said.

“That night made me think so much. I always wanted to become a pilot. I determined myself saying life changing I had to take. I wanted my father’s legacy not to to fade. It should be continuing for generations. So I said to myself that I would become a music director. That is the night I decided to become a musician. I never said this anywhere” Yuvan said.

Mohammed Shami, once again caught in controversy but this time during the world's biggest cricketing tournament. He is one of the prominent pace bowlers...