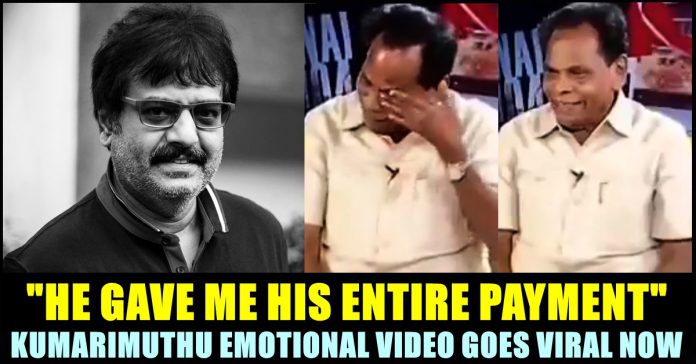 With celebrities sharing the fond memories of themselves with actor Vivekh who died of cardiac arrest on Saturday, an old video of actor Kumarimuthu sharing about how Vivekh helped when he financially struggled to get his daughter married was released by anchor and cricket commentator Pradeep and is being shared widely by the users of social media sites.

“I don’t care if anybody gets angry with me, I would bravely say that Vivekh is the best actor and human among the comedy actors” said Kumarimuthu in the interview which was shot years ago. “I had to get my last daughter married and I didn’t have money at that time. I was struggling a lot financially at that time” Kumarimuthu said and went on to explain how Vivekh helped him in that situation.

“I went to meet Vivekh and said that there is an opportunity to act in a drama in Sri lanka. He asked how much will be the payment for us and I said that I will be getting Rs.50,000 and he will get Rs.2,00,000. We went to Sri lanka and completed the drama successfully. The next day they paid me Rs.50,000 and I became happy” Kumarimuthu said.

“That Prasath gave Vivekh his payment Rs.2,00,000 and I was standing near him. He received his payment and gave it to right away, saying that it is for my daughter’s marriage” Kumarimuthu said and could be seen shedding tears. “In my entire life, after Kalaivaanar, he is the only artist and a human” he added.

Adding the video in his twitter timeline, Pradeep wrote “Vivek was a fantastic comedian in movies and a hero in real life. Remembering this incident that Kumarimuthu shared in an interview with myself and Sriranjani. He will continue to live in our smiles.” in his tweet.

Vivek was a fantastic comedian in movies and a hero in real life. Remembering this incident that Kumarimuthu shared in an interview with myself and @Sri_TS . He will continue to live in our smiles.#ripvivek pic.twitter.com/ES8dj4ryP1

Previous articlePugazh Got Upset After A Fan Requested Selfie At Actor Vivekh’s Funeral !!
Next articleWhy BCCI Denied The Annual Central Contract For T Natarajan ?? Check Out

After getting evicted from Bigg Boss show, Vel Murugan met media and started sharing about his experience with his housemates in Bigg Boss house....

Director Perarasu who is known for directing blockbuster films such as "Thiruppachi", "Sivakasi", came up with an emotional tweet slamming reviewers who are spreading...