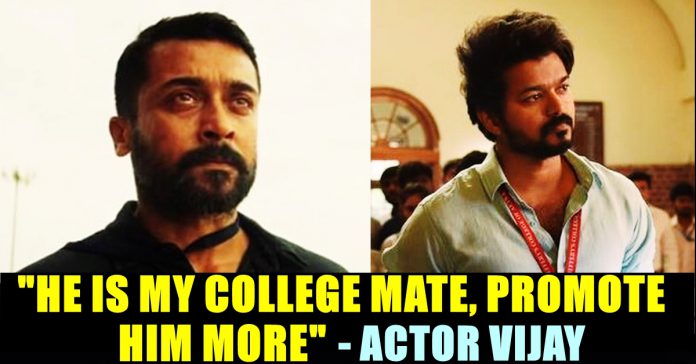 Actor Vijay who is known for his huge fan base in Tamil nadu, is currently basking in the success of his recently released “Master”. The 46 year old actor is also known for valuing his friendship in hos own ways. During the making of “Master”, he invited his close friends to shake their legs with him for the opening song. In a most recent interview, actor Sanjeev revealed how Vijay provided him a food parcel amidst the intense COVID 19 lockdown. Read : Sanjeev Shared How His Friend Vijay Tried Contacting Him Despite Of COVID 19 Fear !!

Vijay and Suriya shared screen space in “Nerukku Ner”, “Friends”. Despite being onscreen rivals, the duo has always maintained a cordial friendship between them. PRO Nikhil, ahead of his film’s release, appeared in an interaction with a private youtube channel and opened on how Vijay expressed his concern towards the growth of Suriya in film industry.

“I worked with Vijay sir in “Nerukku Ner”. The project got initiated by having Vijay sir and Ajith sir in the lead roles. Later, Suriya replaced Ajith and the promotions required equal balance. At the time, Vijay said to me that Suriya is his college mate and asked me to promote him more. He gave me several ideas for promotions as well” Nikhil said in the interaction.

The particular video is trending in Internet among the fans of both the actors.

Further Nikhil shared about many of his experience with various top actors including Rajinikanth, Ajith kumar, Vijay, Vijay sethupathi etc. In the interview, he also shared on how he impressed actor Ajith kumar with his idea of providing food to the drivers of celebrities in the marriage of him.

On the work front, Vijay committed his next film with director Nelson Dileepkumar and Sun pictures. Suriya who gave a massive success through “Soorarai Pottru”, is all set to appear in an anthology directed by Gautham menon. He is also planning to work with director Vetri Maaran in “Vaadi Vaasal”. Ajith kumar is busy completing the shoot of “Valimai” update of which is one of the highest demands in the Internet right now.