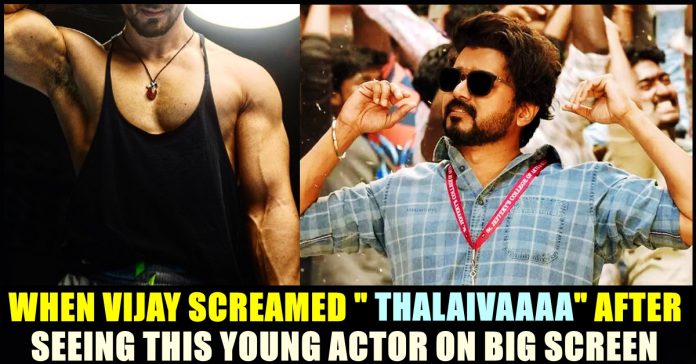 Actor Vijay turns 47 on 22nd of July 2021 and the online fans of the actor are celebrating the event by trending hashtags, releasing common Dps, sharing fan made posters etc. Ahead of his birthday, a special twitter space was conducted by The Route and celebrities such as Lokesh Kanagaraj, Malavika Mohanan, Anirudh Ravichander, Keerthy Suresh participated in it to wish their colleague. DD of Vijay TV fame hosted the twitter space.

In the space, Malavika Mohanan shared about an interesting, unknown fact about the actor which left the fans of him go gaga over it. She who paired with him in “Master” revealed that Vijay is a biggest fan of Bollywood actor Tiger Sheroff and shared about how he screamed “Thalaivaaa” while seeing him on screen.

Actor Vijay, known for his huge fan base, was last seen in “Master” directed by Lokesh Kanagaraj. The actor who debuted 27 years ago in the Tamil film industry, influenced an enormous number of youths and kids. Several fan clubs are being operated across the state only to celebrate him. Most recent instance for the power of his fan base is a selfie the actor captured in the shooting spot of “Master”.

Having a loyal fan following in all age groups, Vijay always suggested his fans to ignore negativity. His fans backed the actor during his hard times. Be it a release problem or bad reports, Fans of the actor never failed to stand with the actor. We all know that the actor is a huge fan of “Superstar” Rajinikanth. Now, actress Malavika Mohanan has shared about his love towards Tiger Sheroff, son of Jackie Sheroff who played villain in “Bigil”.

The actress said that the crew of “Master” went to theatre during the shoot of the film in Delhi. They went to witness Tiger Sheroff’s “Baaghi 3”. “When we went to see the film as a crew, I saw him getting visibly excited for the introduction scene of Tiger Sheroff. He screamed “Thalaivaaa” on seeing him entering the scene. Many fans don’t know this side of Vijay, I guess. Later, he mentioned about his admiration towards the young actor to me” Malavika said to Divya Dharshini.

.@MalavikaM_ – “#Vijay sir really enjoyed #Baaghi3 when we saw the film together as a team in a theater. He screamed Thalaivaa when @iTIGERSHROFF appeared onscreen. He really likes Tiger!”

Fans of Vijay can’t keep calm after knowing about the unknown fact. Check out some of their reactions below :

Watch the trailer of Baaghi 3 below :

Tiger Sheroff who is best known for the “Baaghi” series, is just 31 years old. Being one of the highest paid actors in India, he has featured in Forbes India’s Celebrity 100 list since 2018.