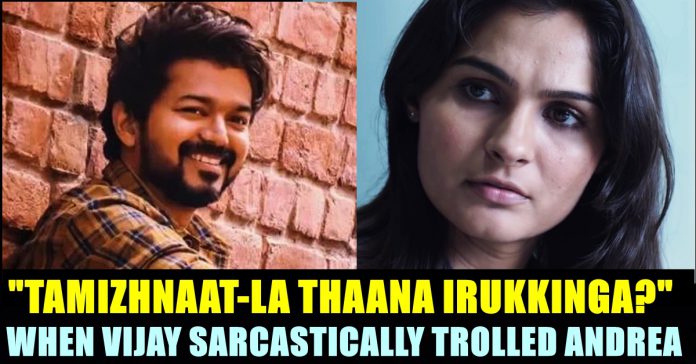 Though Vijay is widely believed as a person who will remain quiet and humble in the shooting spots of his movies, people who are very much close to him would say that he is one of the most fun loving person who would laugh out loud for quality jokes. Now, actress Andrea who is going to be seen with the “Bigil” actor in “Master”, has revealed an interesting incident that took place in the shooting spot of “Master”.

In “Bigil” movie, Vijay lent his voice to a song named as “Verithanam” which was used as an introduction song in the film. Best known for his dancing skill, Vijay also sung few numbers in his 27 years of cinema career. In the sets of “Master” movie, Vijay talked to his colleagues about his singing experience of “Verithanam” in Bigil which was composed by A.R Rahman. Andrea who didn’t watch the film “Bigil”, searched for the song in google and appreciated the actor. Vijay who came to know that Andrea didn’t know about “Verithanam” song earlier, surprised and trolled the actress by asking “You are living in Tamilnadu, right ??”. He went on to roast the “Vadachennai” actress by asking “We both sung a song together named as “Google Google”, have you heard of that ?”

Recollecting the wonderful memories of “Master” shooting spot, Andrea says “I became a fan of him only after acting with him in “Master”. He is such a wonderful and down to earth person. Becoming someone’s fan after knowing about them personally is always special” the actress said who added that a car scene in “Master” in which she and Vijay shared screen space will be special.

“I accepted to act in this film only for those who are repeatedly asking me when I am going to act in a film with Vijay” Andrea said. While sharing about something memorable that took place between herself and Vijay in the shooting spot of “Master”, Andrea shared the incident where Vijay trolled the actress in a light manner.

“I haven’t watched “Bigil” yet. Vijay was talking about a song which he sung in “Bigil”. I didn’t know about it then. I searched for the song in Google and appreciated him in the shooting spot, the next day. He who couldn’t believe that I watched the song after so many days, asked whether I am in Tamilnadu or not. He further asked whether I heard “Google Google” or not which we sung together” says Andrea with a wide laugh in her face.

Watch the video below from 16th minute :

The film which was supposed to release on 9th of April got postponed due to corona crisis and is expected to have a grand release post lockdown. It includes an ensemble cast including Vijay Sethupathi, Malavika Mohanan, Arjun Das, Shanthanu, Gouri Kishan and many others. Directed by Lokesh Kanagaraj, the film’s music and background score is being composed by Anirudh Ravichander.

Comment your views on this interesting incident shared by Andrea !!

Dhiwaharan Palani - September 26, 2020
0
Actor Vijay paid his final respect to late SPB by visiting his funeral in person. The singer's funeral was held at his...