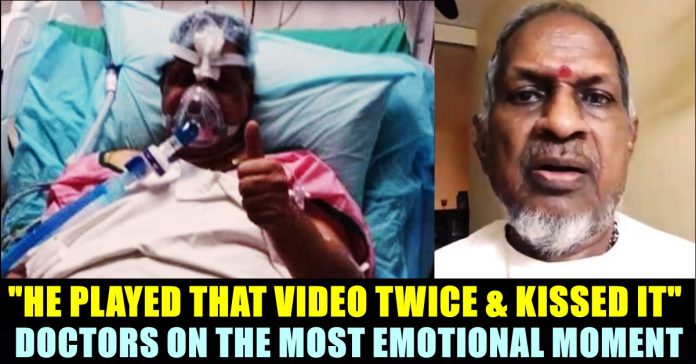 The relationship between Ilayaraja and SP Balasubrahmaniam is eternal. The duo which collaborated in so many films has always maintained a special bonding between them, despite of the problems that took place regarding the copyrights issue. Entire industry shocked when Ilayaraja sent a legal notice to SPB demanding him to stop performing his songs in public events and concerts.

SPB had to stop performing songs composed by Ilayaraja. This created a huge controversy, and it was time for the Tamil music industry to discuss how royalties should be shared between musicians, lyricists and singers. Everybody was confused about who owned the song. The confusion has persisted ever since. However, their friendship was so strong that such issues didn’t affect their emotional bonding.

As soon as knowing about SPB’s health condition, Ilayaraja released a video asking his dear friend to get up and come. He said “Balu . . Yezhunthu Va . . ” in the video which left the Internet in a saddened state. “Balu, get up soon and come. I am waiting for you here. Our life is not something that ends within cinema. It didn’t start in cinema as well. We started it in a random music concert. Though we fought with each other, our friendship is like Music and Tune. It will never separate. My instinct says that you will come soon. I hope it becomes true. Come soon, Balu” Raja said in that video.

Now, after the death of the legendary singer, Doctors of MGM hospital hospital has revealed that SPB watched the video twice and kissed it. The doctors who were explaining how SPB co-operated with them in the 51 long days of his battle, said that he did it when his son SP Charan showed him the video.

SPB was getting treatment in the MGM hospital since August 5. On Friday, his body was taken to his house in Kodambakkam on an ambulance as the 74 year old’s body failed to respond for the treatment. Dr. Sabanayagam of MM hospital said that the nurses who were posted to care for him got surprised with the care SPB gave them. “The singer couldn’t speak much but he gestured or wrote a little notes asking them why they are working on long shifts. His first not to the nurses was a “love you all” message to the nursing team” the Doctor said.

Dr. Deepak Subramaniam explained how SPB reacted when his son played him a video of Ilayaraja asking him to come soon. Charan, sometimes played the videos and interviews gave by his friends. SPB, generally responded to them by simply nodding and by smiling.But when Charan played the video of Ilayaraja, SPB, asked Charan to come closer. “He asked for the phone, replayed the video and kissed it. It was one of the moving moments for all of us.” the senior surgeon said.

Here’s that video of Ilayaraja :

SPB was responding well to the treatment till Wednesday. His health was improving and the amount of air that moved in or out of the lungs with each respiratory cycle increased giving his doctors and family hope. However, on Thursday, there was a cerebral haemorrhage, leak in the brain that made the treatment difficult. “To stop the leak, we need to stop the medication that thins his blood. But his blood has to be thin to flow freely in and out of ECMO”, said Dr. Rao. With a cardio respiratory arrest, the doctors declared him as dead at 1 : 04 PM on 25th of September.

Here’s the video Ilayaraja released after knowing about SPB’s death :

Previous articleRajinikanth & Ajith Fans Thrashed This Popular Personality For Blaming Them !!
Next articleKL Rahul’s Tamil Impressed The Fans Of Tamilnadu !!

Vignesh, a 29 year old IT employee committed suicide for unknown reasons in Kovilpatti. He who graduated in Engineering was working in a software...