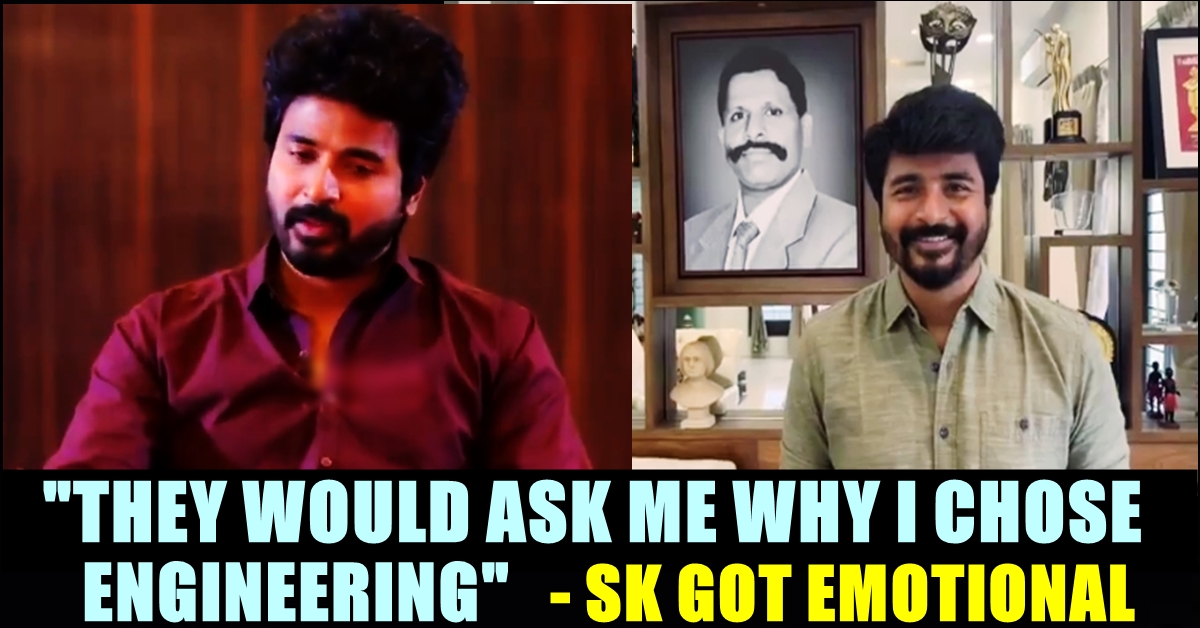 A video of Sivakarthikeyan sharing about the struggles he faced due to the absence of his father since his teen days made people extremely emotional. When the actor garnered his first ever award as a “Best entertainer” in Vijay Awards, he said that he badly misses his father at that special moment with tears rolling down from his eyes. The actor’s emotional break down gained him immense support from the fans of Tamil cinema. Now, a video of himself sharing about the hardship he went through due to his father’s demise made people go emotional.

Actor Sivakarthikeyan, who enjoys a fan following among all age groups and across genders, is one of the most prominent upcoming stars in Tamil film industry. He was last seen in Namma Veetu Pillai and Hero directed by Pandiraj and P.S Mithran respectively. He is also one of the busiest actors in Kollywood industry right now. Having commitments for nearly half a dozen movies, Sivakarthikeyan’s third production venture is also getting ready on full swing.

As we all know Sivakarthikeyan started his career as a mimicry artist. Despite initial reluctance to participate, he won the show. Prior his hosting career, he appeared in short films including his friend Atlee’s Mugapputhagam, Identity, Kurahl 786 and 360°. After debuting in Tamil film industry as protagonist through Pandiraj’s Marina, Sivakarthikeyan went on to give massive successes such as Maan Karate, Remo etc.

He is also enjoying a massive fan following in social media platforms. Now, a video clip from one of his recent interactions with a youtube channel is trending in social media platforms. In the video, Siva could be seen sharing the hardship he went through since his teen days. The actor said that a dialogue he uttered in “Namma Veetu Pillai” about losing father was improvised by himself.

“It was a dialogue that came with the flow. It was not in the script. While delivering the dialogue, it broke my heart” said Sivakarthikeyan about a dialogue which will go like “You are having a father even now, But I lost my father when I was a child” in the film “Namma Veetu Pillai”. Sivakarthikeyan went on to share about the struggles he faced after his father’s demise.

“It has been 18 years since my father’s demise. We have been thinking about him every second. For a child’s growth, financial support and moral support are very important. When a child fails to get both of these, it is like leaving him in a mid of the sea.” Sivakarthikeyan said. “At that time, his future depends on which paddle he grabs. I would presume that I got titles like “Ethir Neechal” because of the struggles I faced” he added.

“Every Tom, Dick and Harry would advice me as I had lost my father. They would say several things to me. Some will advise me to achieve good things in life whereas others would look for ways to criticize me. They would ask why I took Engineering and would say that there is no scope for it in future. When I entered Television, I have faced people who criticized that choice as well” the actor said.

“I know that I would achieve something in my life. But I had no one to share the pain. I can’t share it to my mother as she was already broken. That’s when I search for my father. The pain is eternal and that’s what makes me work even more sincerely. I see my achievements as a tribute to my father. The pain of not having him with me still exists” Siva got emotional.

You’ll only fully understand what he’s talking about when you’ve gone through something like that pic.twitter.com/i5APtNUcnm

Many people came up with reactions sharing their personal experience. “I know a person in my circle who faced situation. He always think abt his family being a first child & a bread winner. Doesn’t express much. He just think twice b4 starting or buying anything. Struggle btwn family need & his personal interest. SK’s Pain is real” wrote a twitter user whereas another one said “man. the pain is real.”

man. the pain is real. https://t.co/taiMWNBlJY

I know a person in my circle who faced situation. He always think abt his family being a first child & a bread winner. Doesn't express much. He just think twice b4 starting or buying anything. Struggle btwn family need & his personal interest. SK's Pain is real @Siva_Kartikeyan