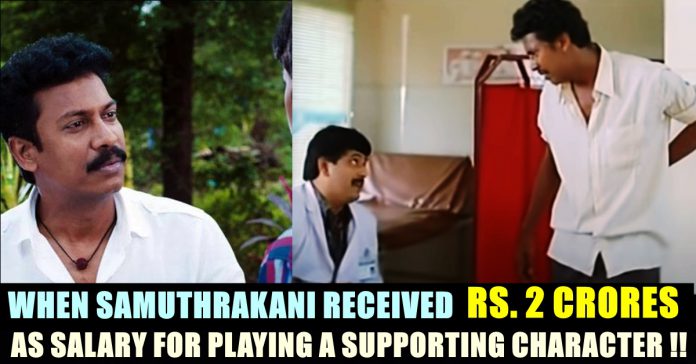 Samuthrakani, is one of the busiest craftsman in Tamil film industry right now. He who acts in variety of roles such as Father, brother friend and villain is also acting as protagonist in socially responsible films. He also involves himself in directing movies and made a sequel to his highly successful film Naadodigal recently.

Now, a recent report about him, has proved that his disciplined manner with humble behaviour is the sole reason for him to reach the height. We all are aware about the fact that people who works in Tamil film industry, especially the lead actors, would demand money from their producers for the expenses that takes place during the shooting of a film. The money which will be paid by the producers should be excluded from the salary of the actors. No matter how huge the salary amount of an actor is, Producers must bear the travel expenses for them from their home to the shooting spot. This is how it works in Tamil film industry, according to reports.

Now, actor Samuthrakani who entered Tamil film industry as a junior artist, gained a separate audience for himself through his natural acting and rural slang. After acting in many films as a supporting artist, Samuthrakani received national award for his acting in “Visaranai”. Later, he got an opportunity to share screen space with Superstar Rajinikanth in “Kaala”. His performance in “Vada chennai” as main antagonist impressed audience as well. The actor, while having a handful of films lined up, received a call from director SS Rajamouli, director of Bahubali series.

The filmmaker called Samuthrakani to ask him to do a role in his upcoming Telugu film “RRR” which is going to be made of a budget of Rs. 350 crores. Samuthrakani who immediately accepted the offer, was asked by Rajamouli to meet him in person in Andhra Pradesh. Generally, such meetings prior collaboration will be arranged by the production houses. But Samuthrakani, without waiting for Rajamouli’s manager’s call, booked a flight himself to reach Andhra by spending his own money and booked a hotel for him to stay there as well. Rajamouli’s manager who was supposed to make these arrangements, got surprised and informed about it to the filmmaker.

After reaching Andhra Pradesh, Samuthrakani met Rajamouli in person and heard about his role. When Rajamouli asked how much money he wants to do the role, Samuthrakani, reportedly said that acting his (Rajamouli’s) film is an honour and denied to get payment.

However, after completing the role, Samuthrakani received cheque from the RRR makers for Rs. 2 crores. Surprised actor, said to them that they gave him a wrong cheque only to get an answer from them saying that it his pay for his work. Word on the humble attitude of Samuthrakani spread across the Telugu film industry, as a result of which he is getting several film offers from Tollywood. Among the several producers, Rajamouli’s son who is also involved in film production, approached Samuthrakani to do a role in one of his upcoming films. Samuthrakani who accepted to give dates, denied to get payment from him saying that the amount he received for his father’s RRR is enough.

However, Rajamouli’s son insisted Samuthrakani to get paid and gave him a cheque for Rs.1.5 crores to act in his film. This proves that hard work with good qualities such as humbleness, discipline and respect will elevate an individual to a next level in their career.

Actress Slammed Men Who Are Sending Pictures Of Their Private Parts !!

Actress Anumol who is known for her works in Malayalam film industry, expressed her frustration on receiving pictures of private parts of random men...

John Abraham is back on the big screen today with his film Parmanu: The Story of Pokhran. The film, based on India's nuclear tests...