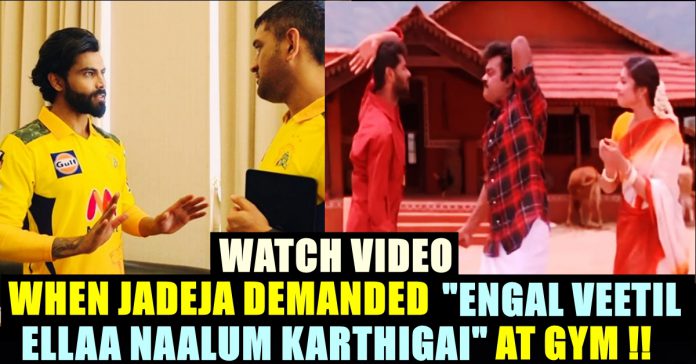 An interesting revelation made by Chennai based Indian spinner Ravinchandran Ashwin about Ravindra Jadeja’s taste in the most popular sentimental Tamil song “Engal Veetil” from “Vaanathai Pola” made Tamil speaking Indian fans and Chennai Super Kings fans to go gaga over it. Ashwin who is pretty much interactive with his fans and followers through his official youtube channel, in one of the recent shows, revealed that Jadeja wanted to hear the song while working out in a Gym. He who couldn’t believe the fondness Jaddu had over the song, shared it to his followers with a sheer excitement.

Ashwin enjoys nearly 7 lakh subscribers for his youtube channel “Ravichandran Ashwin”. On 4th of June he made a show named “The Switch Hit & Reverse Sweep Masters: Discussion | Netru Indru Naalai” with Prasanna. He made the interesting revelation after remembering about it during the start of the show.

Team India led by Virat Kohli landed in England a couple of days ago to play the finals of World cup test championship against Kane Wlliamson led New zealand. While spending the isolation, players are allowed to train and the BCCI has now allowed the family members of the players to accompany them. Ravichandran Ashwin and Ravindra Jadeja, two of the most prominent players of the team who are expected to take place in the playing 11 of the finals, happened to share some time together in a Gym on Friday, it seems.

Ashwin, during the start of his show, suddenly remembered about Jadeja’s surprising gesture and started “By the way, an important information” out of excitement. “Today, I went to the Gym and I would always love to hear Tamil songs while working out in Gym. Ravindra Jadeja who was working out with me, suddenly asked to play a Tamil song. When I lent my ears to see which song he was demanding, it was “Engal Veetil Ellaa Naalum Karthigai” song of Vijayakanth from “Vaanathai Pola” film” Ashwin said.

“Then, he asked about the film to me and I explained it to him” Ash added. Watch the video below :

Ravindra Jadeja would have become aware of the Tamil song after seeing a post from the official social media of Chennai Super Kings in which they used the song for background. On 15th of May, official Instagram account of Chennai Super KIngs uploaded a reel by having the video glimpses of the Dhoni led team with “Engal Veetil Ella Naalum Kaarthigai” in the background. The video showed the teammates of CSK having good times with each other.

“Vanathai pola loves with the #SuperFam! Send in all of your la la la’s! 💛 FamilyDay #WhistlePodu #Yellove” caption of the post read.

As far as England tour is concerned, Team India includes an ICC event and five Test matches. They will kick off the tour with the final of the World Test Championship against New Zealand, which will be played from June 18 to 22 in Southampton. Let us wish the best for the boys to clinch the trophy and to do an “Engal Veetil Elaa Naalum Karthigai” at the soil of England.

The official twitter account of Netflix India is very much known for its humorous tweets and replies to its followers. In order to make...

A news update on an arranged marriage that took place in Andhra Pradesh failing in a miserable way is trending in social media platforms....

Entire social media is flooded with the reactions for the ban of PUB-G mobile application. While some of them are supporting the movie of...