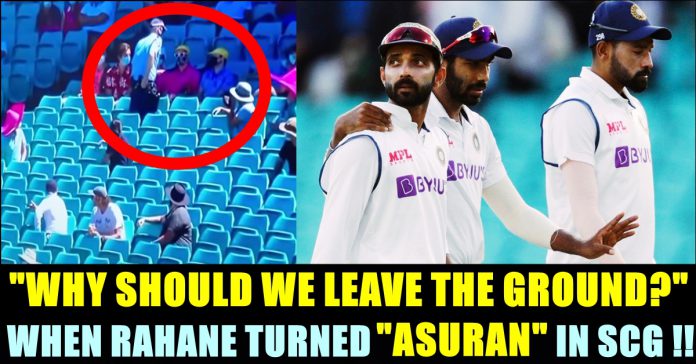 Mohammed Siraj, highest wicket taker for India in the Australian series, opened on the racial slur he faced from the Australian crowd during a match and revealed how Rahane turned down the offer of umpires who asked him to leave the field if he wants. Siraj said that he used the abuses as a tool to boost his mental strength and didn’t let them affect it instead.

Players of team India who took part in the historic Brisbane win are extremely delighted and are uploading posts in their respective social media accounts to express their happiness. They garnered a massive welcome in their respective home towns from their fans, friends and relatives.

Washingtom Sundar, Natarajan, Rishab Pant, Shubman Gill, Mohammad Siraj, Shardul Thakur, Navdeen Saini are some of the youngsters in the winning team who showed grit and character to clinch the trophy in the Australian soil. Pujara, Rahane, Rohit Sharma’s experience also helped the team big time throughout the series.

Siraj took 13 wickets in the test series and became the highest wicket-taker for India. Meanwhile, the cricketer went through both toughest and happiest phase of his life during the test series. He who lost his father after reaching Australia, chose to stay and took part in the matches. During the Sydney test, the cricketer became a subject to racial abuse by the fans of Australia.

After arriving India on Thursday, Siraj, while interacting with media, shared about the incident where on field umpires asked team India to leave the field if they want. Siraj and Bumrah faced faced racial abuse and reports suggests that the crowd who were present in the Sydney cricket ground humiliated the Hyderabad cricketer by calling him as “brown monkey”. The incident made team India to register an official complaint with match referee David Boon.

Siraj, without losing his nerves, brought the matter to the notice of his captain Ajinkya Rahane who the approached the umpires Paul Reiffel and Paul Wilson during the game. “I faced abuses in Australia. The case is going on, let’s see whether I get justice or not” said Siraj to the media. “My duty is to report about the incident to my captain” he added.

Further Siraj revealed how Rahane turned down the offer of umpires who asked him to leave the field. “The umpires told us that you can walk off the field and and leave the game the Rahane Bhai told the umpire that we won’t leave, we respect the game. We did no mistake, so we will play” Siraj remembered.

Siraj, being the highest wicket taker of the series for India, said that the unruly behaviour of the crowd acted as his morale-booster. “The abuses which I faced in Australia made me mentally stronger. I didn’t let them affect my game” the 26 year old said.

It has been reported that six spectators removed from the stadium during the fourth day of Sydney test which ended in a draw. Australian management has promised a strongest possible action for those who fpund guilty.

Tamilnadu have registered 3550 confirmed cases of Coronavirus so far. Among the total cases, 1754 reported from Chennai city. The capital of the state...