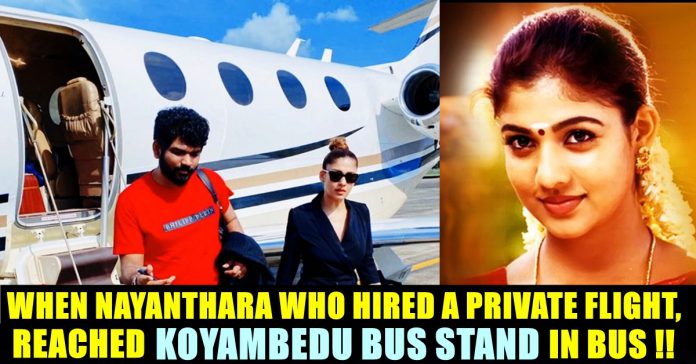 Nayanthara who is fondly called as “Lady Superstar” by her fans, is one of the highest paid actress in Kollywood right now. Having acted in at least 70 films, Nayanthara is currently concentrating in both commercial and critically acclaimed films. She is one of the very few actresses in India who is constantly acting in female oriented films and excelling in it. Some of the highly appreciated solo films of her are Aramm, Kolamavu Kokila, Imaikka Nodigal etc. She paired with almost all the top tier actors of Kollywood including the new ones such as Sivakarthikeyan and Vijay Sethupathi.

Now, as the actress improved her financial status with her sheer hard work, an old incident of Diana Mariam Kurian (original name of Nayanthara) arriving Koyambedu bus moffusil bus stand of Chennai in a government bus to make her debut through “Aiyaa” has been shared by senior movie journalists of “Valaipechu” youtube channel.

Nayanthara made her acting debut in the 2003 Malayalam film Manassinakkare with Jayaram. At that time, Director Hari, while selecting artists for his upcoming film “Aiyaa”, was searching for a girl with “homely look” to cast in him film. Not satisfied with the heroines he was shown, Hari approached PRO Johnson of that film and asked him to find a girl by saying the requirements.

PRO Johnson shared about the requirement to his friend Ajay, a Kerala based reported who worked for “Nana” film magazine. Ajay sent the pictures of Nayanthara to Johnson. The pictures of the actress were captured when she gave interview to that magazine after acting in a couple of films in Malayalam. Read : Is This Nayanthara ?? Oldest Video Of Her Goes Viral !!

Director Hari who saw the photographs of Nayanthara, selected her to do the role in his Sarath kumar-starrer. The editor of “Nana” magazine who is a lady, suggested Nayanthara to act in Hari’s film instead of acting in a Malayalam film about which the discussions were going. Nayanthara got the blessings of the editor and reached Chennai to act in the film.

“Generally, debut actresses from Mumbai, Bangalore would be brought through flights by the production houses in film industry. But Nayanthara came from Kerala to Chennai in a government bus with her mother and father. They reached Koyambedu bus stand at the wee hours. PRO Johnson received the actress in Koyambedu bus stand and accommodated her in a hotel in Vadapalani” said Bismi, one of the senior movie journalists.

After acting in “Ayya”, Nayanthara got the opportunity to pair with superstar rajinikanth in “Chandramukhi”. The actress, further paired with several heroes and took a break from film industry after getting caught in a number controversies. However, she gave her come back through “Raja Rani” and started her second innings only to gain the tag “Lady Super star”. She was the only South Indian female actor to have made it to the Forbes India Celebrity 100 2018 list, with her total earning credited at ₹ 15.17 crores.