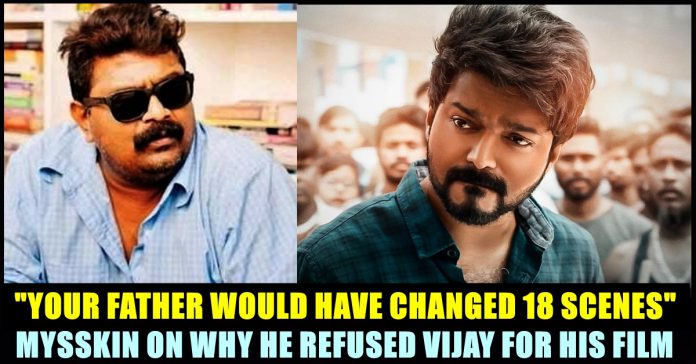 An old video of director Mysskin trolling Thalapathy Vijay and his father S.A Chandrasekhar for changing the scripts of filmmakers has got resurfaced in the Internet with netizens laughing out loud. In the interview, Mysskin could be seen revealing about an incident that happened during the preview show of his debut film “Chithiram Pesuthadi”. It is notable that Mysskin worked as an assistant director in Vijay’s “Youth” which was directed by Vincent Selva.

Actor Vijay, known for predominantly appearing in Tamil films, was last seen in “Master” directed by Lokesh Kanagaraj. The actor who debuted 27 years ago in the Tamil film industry, influenced enormous number of youths and kids through his onscreen presence. Several fan clubs are being operated across the state only to celebrate him. Most recent instance for the power of his fan base is a selfie the actor captured in the shooting spot of “Master”. Recently, a news that reported about a 10 year old kid getting treatment while watching Vijay’s “Bigil” film is also an example for the craze he is enjoying.

However, there is a wide talk about Vijay letting his father, S.A Chandrasekhar, a veteran filmmaker to hear stories for him. The actor had missed some of the blockbuster films such as “Kaakha Kaakha”, “Sandakozhi” etc in his long career. Now, a video of director Mysskin revealing why he refused to narrate story to the actor is doing rounds in social media platforms.

“After I completed “Chithiram Pesuthadi”, Vijay watched the preview show and asked me to make one film like that for him. I replied saying that it is a script that was written for him. Immediately Vijay caught hold of my neck and pushed me against the lift wall. He yelled asking ‘why you didn’t tell me this?’ to me. I replied back ‘I would have narrated you the script but your father would have changed 18 scenes from the film and you would have changed 18 scenes from the film, I would have committed suicide’ said Mysskin in a hilarious manner.

On the work front, Vijay is busy participating in the shooting of “Beast”, directed by Nelson Dilipkumar. Mysskin who directed “Psycho” with Udhayanithi Stalin, is making the sequel of his blockbuster horror film “Pisasu” by having Andrea, Vijay Sethupathi in the lead roles. Comment your views on Vijay replacing Naren in “Chithiram Pesuthadi” which had Bhavana in the female lead.

Previous articleWoman Killed Her Husband For Questioning About Her Illegal Relationship !!
Next articlePicture Of Vijay-Dhoni Went Insanely Viral !! Check What Ajith Fans Did

Shanthanu Replied To Ajith Fans Who Spewed Hatred At Him!!

Actor Shanthanu of "Master", "Chakkarakatti" fame, reacted to the hatred spewed by the fans of actor Ajith kumar in Twitter after he uploaded a...