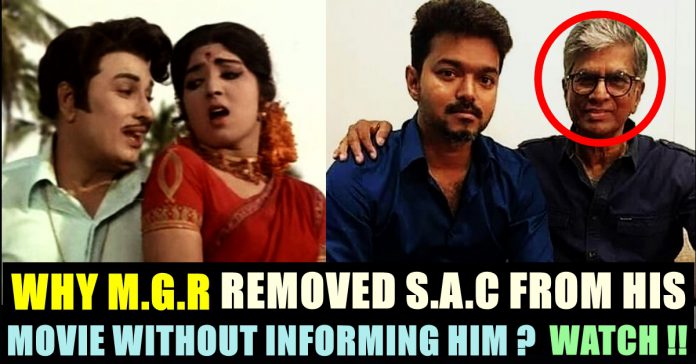 S.A Chandrasekar is one of the very few experienced filmmaker in Tamil film industry who are currently working. In his 40 year long career, Chandrasekar made many impactful movies and mainly introduced his son Vijay who is one of the leading actors of South India today.

The director who made 70 movies throughout his career, introduced Vijay in Naalaya Theerpu. Some of his notable movies are Sattam Oru Iruttarai, Naan Sivapu Manithan, Nenjirukkum Varai etc. He recently made a movie titled as “Capmari” by having actor Jai in the lead. The film marked the filmmaker’s 70th movie and had Athulya, Vaibhavi in supporting roles.

In a recent award function conducted by Galatta youtube channel, SA Chandrasekar revealed how veteran actor MG Ramachandran removed him from his film. The Galatta youtube channel conducted a award function for women and named it as “Wonder Women Awards”. In the award show, the award “Platinum lady of Tamil cinema was received by actress Latha, a senior actress who paired with MGR and Shivaji Ganesan.

Director S.A Chandrasekar presented the award to Latha and thought of sharing a memory which is associated with her. S.A.C worked as an assistant director in the movie “Naalai Namathe” which was directed by Sedhu Madhavan. The film featured MGR and Latha in the lead roles.

“M.G.R was so strict in his shooting spot and we will maintain a pin drop silence when he is around. During a song shoot, we assistant directors would notice the lip sync of the actors. In that song shoot, when I notice that the lip sync is missing, got emotional and shouted “One More” at him (MGR). ” said S.A.C in the award function.

The director went on to add what happened next. “He (MGR) looked at me for few minutes. He accepted to go for one more and finished acting for the song. Then he called me by his side and put his hands around my shoulder. *You will become a huge director some day* he said to me” said S.A.C who added that the interesting part about the incident is yet to come.

“The next day when I was expecting for my car, it didn’t come. When I reached the shooting floor through auto rickshaw, they didn’t let me in. The director Sedhu Madhavan sir came out and asked me to work with him in the next movie” laughed S.A.C. “However I managed to direct 70 films in my directorial career as he said” he added.

S.A.C’s recent movie Capmari received severe criticism from the criticsfor its content.In the early 2000s, Chandrasekhar slowed down his work as a director and focused on business interests, including on the construction of a three star hotel for his son.

He turned as the lead actor at the age of 70 in Touring Talkies which is also his last directorial venture. With Nayyapudai , is the veteran’s second attempt in heroics. S. A. Chandrasekhar is back after a break with a biopic on social activist Traffic Ramasamy. What do you think on this incident shared by the filmmaker ?? Comment your views below !!

Chinmayi who has been constantly raising voice against women harassment, came up with a screenshot exposing a random Instagram using guy who sent abusive...

While responding to requests that are being made by poor students, farmers and struggling graduates, Sonu Sood also grabbed headlines for his witty replies...