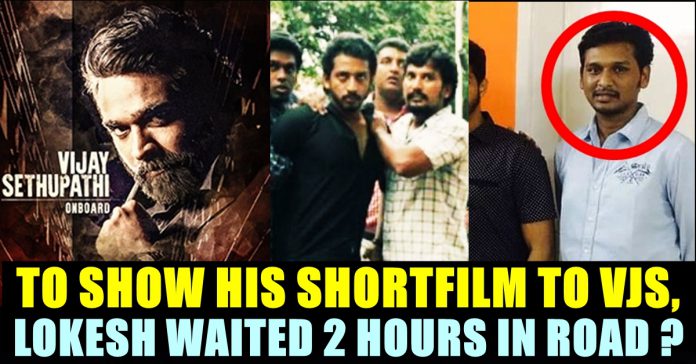 This is the generation of filmmakers who comes from short film background. Lokesh Kanagaraj, one of the most happening filmmaker of Kollywood right now is also made short films before entering Kollywood. Having directed just two films so far, he impressed both audience and critics with the brilliance of his work. Being released with “Bigil” which is one of the highly anticipated film of the year, “Kaithi” is ran successfully across the theatres in Tamilnadu and screens were increased due to the positive word of mouth.

Before making the first two films, Lokesh made a tele film and titled it as “Kalam”. The film revolves around a plot about the tragedy between a group of filmmakers and gangsters. Now an old picture of Lokesh Kanagaraj meeting Makkal Selvan Vijay Sethupathi to show his tele film is going viral.

The incident which was happened 7 years ago was shared by one of the actor who acted in the short film. The actor even said that they waited 2 long hours by roadside to meet Makkal Selvan who was a busy actor at that time. “7 Years back #Memories #Past #Kalam Waited for over 2 hours on the road with my co artist Mrk Moses Rajkumar & Director #Lokesh outside Makkal Selvan Vijay Sethupathi’s office to show our tele film “Kalam”.”

7 Years back #Memories #Past #Kalam

Now the filmmaker has improved himself to an extent that he could cast Vijay Sethupathi as an antagonist in his upcoming film. The film which is tentatively titled as Thalapathy 64, has Anirudh Ravichander as music composer. Shanthanu, Arjun Das, Malavika Mohanan are some of the other actors who are the part of this film. As the fans of Tamil cinema are not relieved from the awe of the director’s growth, talks on his next venture is doing rounds. The director reportedly signed for Kamal Haasan’s Raajkamal International and the buzz says that he is going to direct both Rajinikanth and Kamal Haasan as his fourth film.

Let us wish the filmmaker a successful career ahead !!