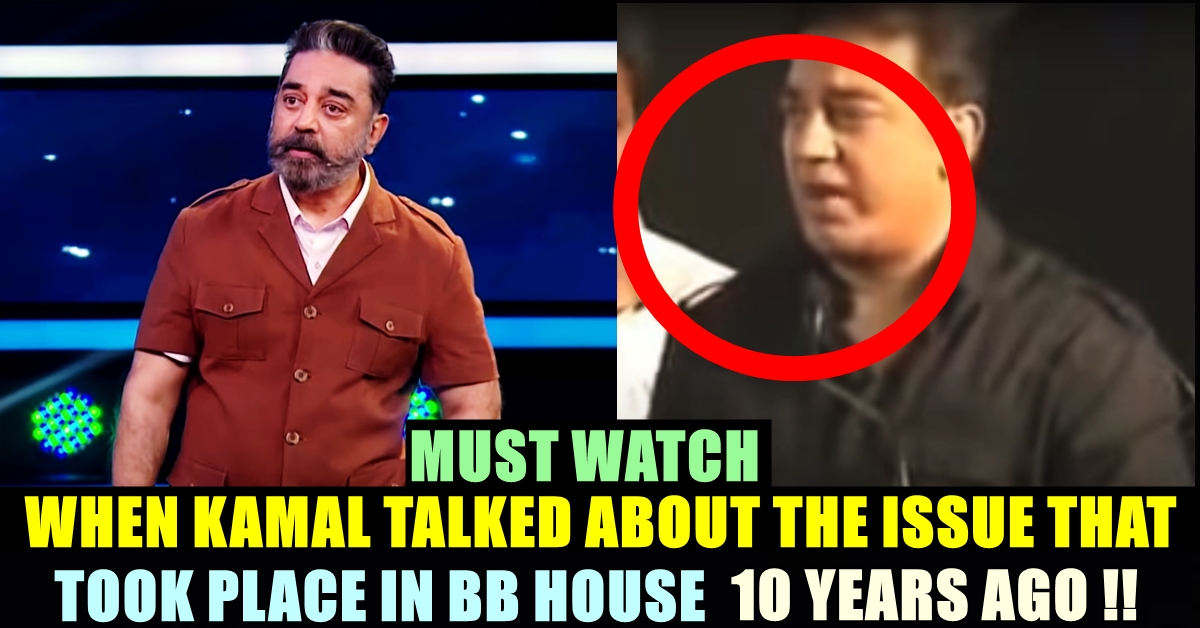 A 10 years old video of Kamal Haasan raising voice against women discrimination based on their marital status has surfaced in Internet after he extended his supportive hand to Anitha Sampath for her solid statement about the same on the weekend episode of Bigg Boss season 4. The way Kamal Haasan handled the issue between Anitha Sampath and Suresh Chakravarthy is being lauded by the followers of Bigg Boss show. The “Virumandi” actor firmly approved that what Anitha said is relevant and appropriate to the current state of the society.

On Tuesday’s episode, Anitha went into a bathroom and bursted out in tears, worrying about the way Suresh Chakravarthy, her housemate was behaving towards her. Being a journalist, Anitha made a statement in front of other contestants on the ritual which is being followed in Indian culture for a very long time.

At one point, Anitha felt that she should have followed the words of her husband who asked her not to participate in the show due to its complications. While talking to Bigg Boss, Anitha said that she feels lonely in the house. “I feel no one is standing for me when an issue occurs. I don’t know what mistake I did to make an old man run away from me when I was about to apology” she said to Bigg Boss. In the confession room, Bigg Boss asked her to be brave and suggested her to state her opinions without hesitation.

In the weekend episode, Kamal Haasan started the show by addressing about the issue that took place between Anitha and Suresh. He initially wanted to hear what the women in the house has to say about Anitha’s statement. Archana and Nisha said that the context of what Anitha stated is right but she said it in an inappropriate situation whereas other female contestants accepted Anitha’s statement completely.

Responding to the same, Kamal said that Anitha must be appreciated for her bold opinion. “If Periyar is alive, he would have appreciated you for sure. That’s what he was doing. He did social reforming and I see him as a social reformer.” said Kamal who added that it is the correct stage to talk about. “If not now, when ?” he asked the contestants who said that Anitha said it in a wrong situation.

Meanwhile, after the streaming of the episode, a 10 year old video of Kamal Haasan addressing the same issue on one of his birthday function got surfaced in the Internet. In the video, the Bigg Boss host could be seen saying that people of India are capable of making women who lost their husbands as Prime minister, referring to Indira Gandhi, the first and only female Prime Minister of India. Also Read : 8 Times When Kamal’s Fictional Movie Moments Became True In Real Life !! A True Prophet !!

He also mentioned about the how our culture will keep changing time and again and why we should not be afraid of it. “When Indira Gandhi became the Prime minister of our country, my grandmother who also lost her husband must have felt bad. They made her shave her head and she was wearing a veil around her head at that time. On seeing Indira Gandhi, won’t she felt betrayed ?? That kind of cultural change will take place every 100 years. So we must stop fearing about such rituals” Kamal said at that time. Also Read : One More Time Kamal Haasan Proved That He Is Way Ahead Of His Time !!

pic.twitter.com/9FAs3jmsth #anitha SUMANGALI ISSUE SPOKEN 10 years back. There is not a single thing you can hate about his politics, vision for TN and India. #BiggBossTamil4 #biggbosstamilseason4 #biggbosstamil #BalajiMurugaDoss #SureshChakravarthi #Archana #AariArjunan #aari

Now, it is evidently proved that Kamal hasn’t sidelined with Anitha for the sake of the cameras but stood by his ideology. Comment your views on the way Kamal handled the situation !!