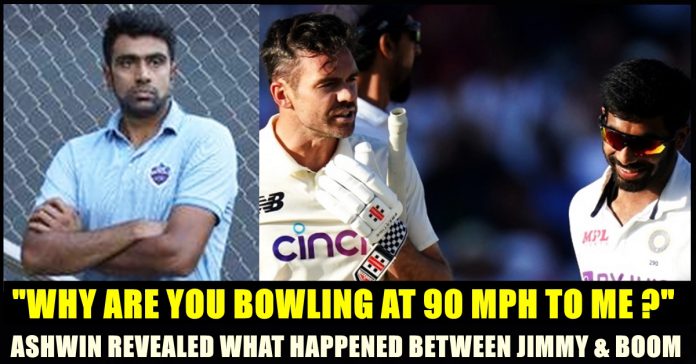 Indian spinner Ravichandran Ashwin and fielding coach R. Sridhar discussed about the victory at the Lord’s for the you tube channel of the former. They two talked about the nuances of the game in a humorous and revealed about the rift between Japirit Bumrah and James Anderson. Ashwin said that Anderson complained about the pace of Bumrah, saying that he bowled at 90 MPH for him while bowling for others at 85 MPH. As soon as the video released, fans of team India are making extreme fun of the English bowler.

The nail baiting fifth day of the second test ended up with the visitors clinching the victory by 151 runs. Setting a target of 272, team India bowled out team England for mere 120 runs and registered history. Fans, celebrities and cricket lovers from across the country have been celebrating the win by lauding team India. Throughout the match, a number of confrontations took place between the players of England and India. The repetitive bouncers bowled by Bumrah frustrated Anderson which created a rift between the duo.

The duo, further discussed about many other things about the match. Sridhar opened on how he influenced everyone to clap louder while Bumrah and Shami were returning to pavilion after the innings was declared. The incident shared by Ash and Sridhar grabbed headlines with netizens reacting in hilarious ways. India and England are going to face each other in the third test which is scheduled to take p0lace on 25th of August.

Railways is planning to seal stations just like airports and passengers would have to arrive 15-20 minutes before scheduled departure of trains to complete...