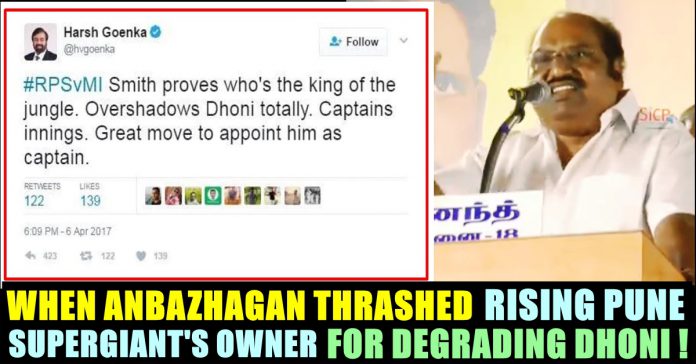 Many people expressing their condolences to the family of J Anbazhagan who served DMK political party as an MLA. The politician who was fighting against the COVID 19 for past few days, died at the age of 62 in a Chennai hospital in the morning of 10th June. Anbazhagan, a DMK MLA, was admitted to hospital on June 2 over “severe acute respiratory distress” and had tested positive for COVID-19 at the time.

He was put on ventilator support on June 3 when his breathing trouble worsened. He was fighting acute pneumonia and his condition deteriorated on Monday evening, according to Dr Rela Institute and Medical Centre, where he was being treated.

His cardiac function dropped and a chronic kidney disease also contributed to his critical condition.In a statement today, the private hospital said: “The COVID 19 pneumonia rapidly deteriorated early this morning. In spite of full medical support including mechanical ventilation at our COVID facility he succumbed to his illness.”

Rising Pune Super Giants is an IPL team in which MS Dhoni featured as a mere player instead of captain. The team was brought in the absence of Chennai Super Kings which was suspended due to betting issues. Sanjeev Goenka who owned the IPL team, wished to have Steve Smith as his team’s captain instead of Dhoni. Harsh Goenka, brother of Sanjeev Goenka kept posting negative comments in social media platforms, in a way of degrading Dhoni for unknown reasons.

In one of his tweets, he said Smith overshadowed Dhoni totally and said that his team made a good move by appointing him as captain.

This tweet was posted in the year 2017, and J Anbazhagan came up with his all guns blazing to give it back to Harsh Goenka. He who is a big time admirer of Dhoni, made several replies to Harsh Goenka for his tweet and got blocked by him.

Check out the screenshots of his tweets below :

Anbazhagan also confronted BCCI once for dropping Dhoni from the national team :

Several other tweets of Anbazhagan supporting Dhoni are doing rounds in the micro blogging social site with emotional captions. Check out some of them below :

We Lost One of our hardcore DHONI Fan Today. 🥺

Anbazhagan became the first big political leader of Tamilnadu to die of Coronavirus. Reports suggests that the politician suffered with Liver and Kidney problems for past 25 years. Let us pray for his soul to rest in peace !!