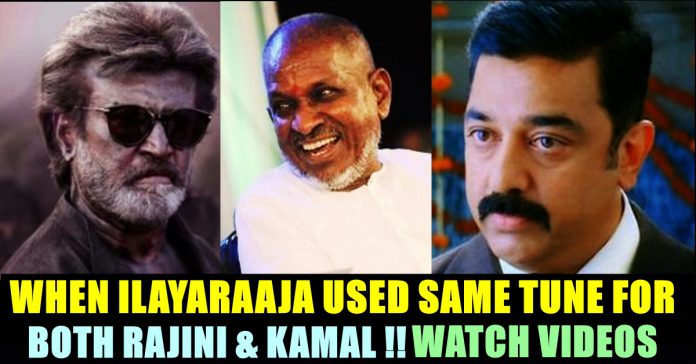 Music maestro Ilayaraja has scored the music for more than 1,000 films and 7,000 songs. He has also rendered 500 numbers and won the national award five times. Being a highly recognised, most lovable Indian musician of all time, Ilayaraja is also known to be highly possessive about the music that he has created in all these years. Now, after several years, it has been came to light that Ilayaraja is so obsessed with his own works that he used one of them twice for two top heroes of Kollywood.

Ilayaraaja debuted through 1976 film “Annakili” and went on to achieve several awards and accolades across the world. Being a gold medalist in classical guitar, Ilaiyaraaja was voted as the all-time greatest film-music director of India in a poll conducted by CNN-IBN celebrating 100 years of Indian cinema in 2013. US-based world cinema portal “Taste of Cinema” placed Ilaiyaraaja at the 9th position in its list of 25 greatest film composers in the history of cinema and he is the only Indian composer in that list. Nicknamed as Isaignani and often referred to as Maestro, people would consider his music as a therapy for depression and loneliness.

He is also known for a number of controversies in his 45 years of film music career. Recently, he accused music director Govind Vasantha of 96 movie for using his songs in his film “96”. He called people who are using his song without his permission as “Impotent” which created huge outrage. Now, it came to the attention of social media users that the musician has used a same tune for two of his songs. To our Bizarre, both of them are hit songs with most number of views in Youtube. Ilayaraaja composed music for Kamal Haasan’s 1982 film “Moondram Pirai” which was directed by legendary filmmaker Balu Mahendra. Along with Kamal Haasan, Sridevi, Silk Smitha, Poornam Vishwanathan and Y. G. Mahendran played vital roles.

A song in the film which starts like “Poongattru” became a huge hit during its release time and is still being considered as one of a pleasing number that was composed by the “Maestro”. In that song, Ilayaraja would have composed a tune which he used in another song of Rajinikanth “En Vaazhvile”. The song took place in “Thambiku Entha Ooru” which was released 2 years later.

Hear the song below from the duration 2 : 50

Netizens started comparing both the songs and wondering how Ilayaraja would have convinced the makers of “Thambikku Entha Ooru” to use a same tune from a blockbuster song of his own. It is a 1984 Indian Tamil-language film directed by Rajashekar and written by Panchu Arunachalam. The film stars Rajinikanth, Madhavi and Sulakshana.

However, the musician who is 76 year old now, is still impressing audience with his music. His recent work in “Pisaasu” impressed audience in big time and his song “Unna Nenachu” sung by Sid Sriram made the film hit to be honest. He is also working on few more Tamil films which are supposed to get release post lockdown.