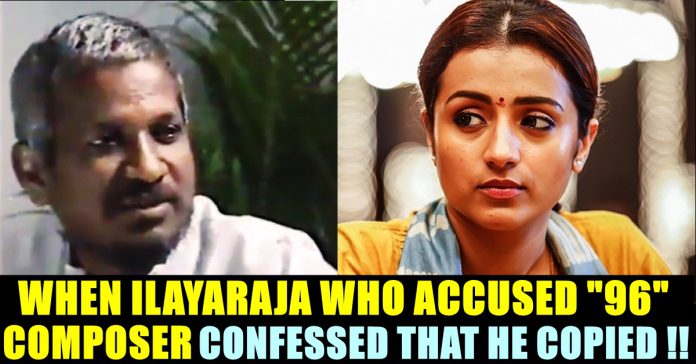 An old video of legendary musician Ilayaraja confessing that he did involve in plagiarism during the making of blockbuster film “Aboorva Sagotharargal” surfaced in Twitter. The video which was uploaded by a fan of Kamal Haasan in twitter was shared by film critic Sudhir Srinivasan who interviewed Ilayaraja in his most recent controversial interaction. In that interaction Ilayaraja called the composers who are using his music without his consent as “impotent”. Now, in this old video, Raaja recalls how he derived a song for Kamal Haasan from an old hit song and blamed himself for plagiarism.

Music maestro Ilayaraja has scored the music for more than 1,000 films and 7,000 songs. He has also rendered 500 numbers and won the national award five times. Being a highly recognised, most lovable Indian musician of all time, Ilayaraja is also known to be highly possessive about the music that he has created in all these years.

The video which shows Ilayaraja and ace singer SP Balasubramaniyam having a conversation, seems to have recorder in late 1990s. “Kamal narrated a situation to me in order to compose music for a song in his film “Aboorva Sagotharargal”. I played a tune according to the situation he narrated me but he didn’t like it. As usual I asked him what he is expecting. He said that the tune I played was so soft and melodious. He demanded a peppy number. He asked my permission to refer an old MGR song “Naan Paarthathile Aval Oruthiyai Thaan” and asked me a similar song” said Ilayaraaja to SPB.

“Then I composed “Pudhu Maapilaikku” song and he liked it very much. When he asked me where I got this idea from, I said that I derived it from the song he mentioned few moments ago” said Ilayaraja who sung “Naan Parthathile” song in “Pudhu Maapillaiku” tone. The musician further said “It is indeed a foul play, ain’t it?” by laughing out louder.

Sudhir who saw this video said that he likes the legend being self critical about himself on a song he worked which barely looks like an inspired one. “Perhaps my favourite part of this video is how Ilaiyaraaja wryly comments, “Idhu emaathu velai illama ennada idhu?” At a time, when people justify straightforward plagiarism, look at this man being almost self-critical about a tune that barely feels inspired.” his tweet read.

Perhaps my favourite part of this video is how Ilaiyaraaja wryly comments, “Idhu emaathu velai illama ennada idhu?”
At a time, when people justify straightforward plagiarism, look at this man being almost self-critical about a tune that barely feels inspired. https://t.co/Vddu698a7C

In the interview that took place last year, Ilayaraja said to Sudhir Srinivasan that what the crew of 96 movie done is completely unethical. “When they don’t have the potential to create a new song to impress the audience, they are using a popular old song to connect with the audience. In “Yaadan Ki Baarat” movie, R.D Varman composed a fresh song to tell story. He composed his own song as a 20 year old one. If the plot requires a 1980’s music, a music director have to compose it himself. This shows their impotence in making fresh compositions” Raja said.

However it looked like Ilayaraja hasn’t seen the movie 96 in which they paid tribute to veteran musician for the immense memories he gave to the music lovers. These statements of Ilayaraja created huge outrage at that time but music director of 96, Govid Vasantha solved the issue by uploading a video of himself playing violin of Ilayaraja’s song “Sunthari” from Thalapathy movie with a caption saying “Forever Fan!!”

The 15 contestants of current BIGG BOSS season includes 8 female contestants in which Sri Lanka based Losliya grabbed the attention of the netizens...