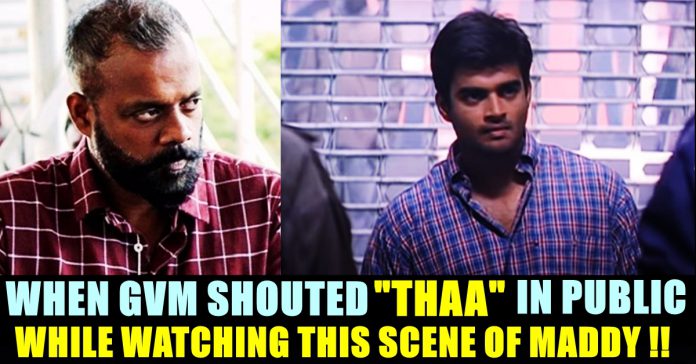 Madhavan, one of the finest actors of Indian film industry, interacted with Indian spinner Ravichandran Ashwin through Instagram live and shared about many of his experience in his acting career which spans more than 20 years. In Reminisce of Ashwin, a show being hosted by Indian cricket player Ravichandran Ashwin in Instagram with celebrated personalities during this quarantine period, actor Madhavan participated for an insightful conversation which lasted more than 1 long hour. Both the influential personalities talked about many things regarding Cinema in India and Ashwin’s thoughtful questions made Maddy to appreciate him for his passion towards watching cinema.

They conversed about many iconic movies Madhavan including Alaipayuthe, Minnale, 3 idiots, Rang de Basanti and many more. One of the most interesting part about the conversation is when they both talked about Madhavan’s “Run” which was his first ever action film in Tamil film industry. The film which was directed by Linguswamy, cinematographed by Jeeva.

Ashwin who said that he watched the movie in Pondicherry when he went there to play a match, explained to Maddy how he enjoyed the film, especially the “shutter” scene. Maddy, added that he accepted the film only after listening to the “shutter” scene from Linguswamy. “I still remember his lines where he said that I will give a tight slap to one of my enemy and he will fall like a “dead lizard”. said Madhavan to Ashwin. “I immediately decided that it will be the best introduction for me as an action hero” he added.

Madhavan went on to share what happened in the preview show attended by his friends and colleagues in the industry including Mani ratnam and Gautham Menon. “Everyone were watching the film normally. They slowly came to their seat’s edge during the “shutter” scene. Gautham was sitting next to me along with Mani ratnam sir. On seeing that first slap from me, everyone got excited as they started uttering foul words. They shouted “Thaa” in excitement, not Mani sir but Gautham got excited” said Maddy.

Watch the video below from 27th minute :

Gautham Menon debuted to film industry by directing Madhavan in “Run”. Since then they are sharing a strong friendship between them. In that particular scene in “Run”, when heroine Meera Jasmine would warn Madhavan about her brother’s goons, Madhavan would run hastily towards the exit only to close the shutter to make sure they are not escaping. Watch that scene Ash and Maddy discussed below :

During its release time, The film won positive reviews from critics and became a blockbuster at the box office, prompting the film to be partially re-shot in Telugu and remade in Hindi under the same name by the cinematographer, Jeeva.

Apart from this, Madhavan and Ashwin discussed about many other films. While sharing about his upcoming project “Rocketry : The Nambi Effect”. Madhavan worried about the fact of Nambi not being recognised by Indian people, especially by Tamilnadu people as he hails from Tirunelveli. He also shared how the film “rang De Basanti” influenced people to protest and how his character in “3 idiots” inspired many youngsters to follow their heart.

Comment your views on this lovely conversation between the duo !!