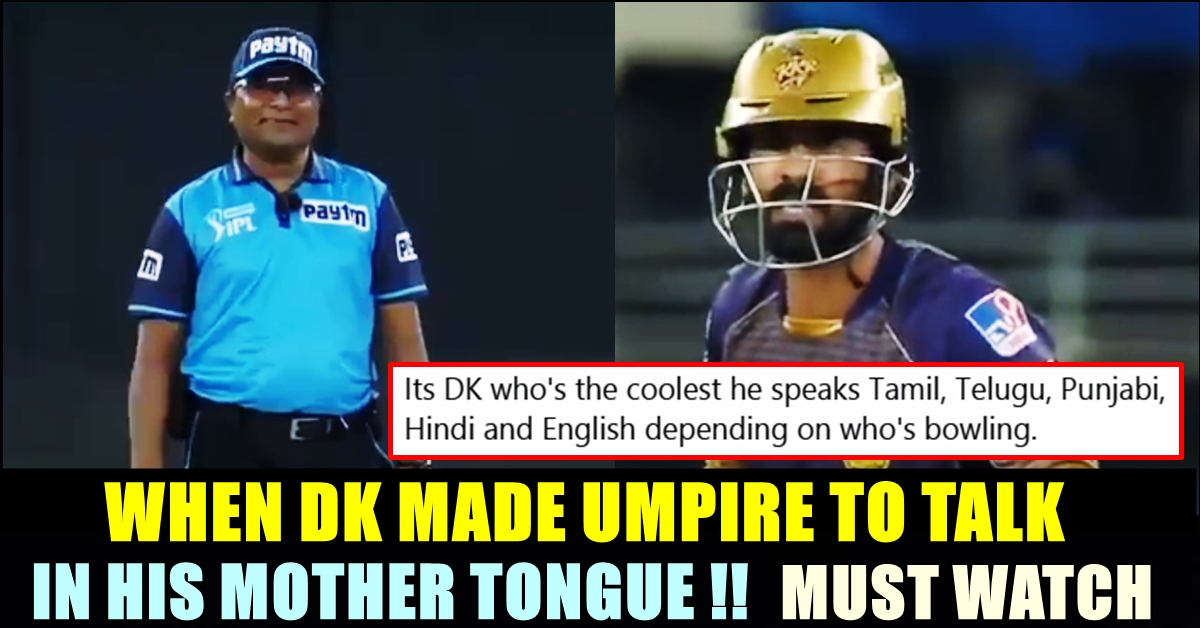 Dinesh karthik who made headlines for talking in Tamil while representing Kolkata Knight riders, now made umpire Chettithody Shamshuddin to talk in his mother tongue while he was in crease. Dinesh who came in to bat as 4th down, made a quickfire 21 with a strike rate of 200 +. His cameo helped his team to reach a total of 170 plus which is a decent total in that condition. While batting, Dinesh interacted with umpire Chettithody Shamshuddin in Telugu language and received a reply from him in the same. Their chat caught in the stump mic and fans of Andhra Pradesh are going gaga on hearing their mother tongue from the middle.

Dinesh Karthik, being a Chennai born, speaks Tamil fluently and knows English, Hindi very well which we saw him using with his teammates and in public interactions. Last night, the cricketer exhibited a glimpse of his Telugu speaking skill. During the 19th over, after smashing Sam Curran for a four and a double, Karthick was waiting to launch one.

At that time, the 22 year old, bowled a delivery by changing his pace at the slot, away from the batsman. Karthik who got completely beaten, thought that it went away for wide and asked Shamshuddin, “Wide Ledhaa ??” in Telugu which means “Ain’t it a wide ??”. Replying to him, the straight umpire said “Lopala, Chaala Lopala, Konjam Kuda Kaadhu” through which he meant “Inside, too inside, not even close to wide” with a laugh in his face. Umpire Sham belongs to Anand Bagh of Hyderabad.

On seeing this video, people heaped all praise to Dinesh Karthik for the way he is communicating with Tamil, Telugu, Hindi, English and Punjabi people on field in their own language. Check out some of the reactions for the video below :

Its DK who's the coolest he speaks Tamil, Telugu, Punjabi, Hindi and English depending on who's bowling.

Srini mama, a popular parody account of CSK owner Srinivasan, said that DK would even communicate with KL Rahul in Kannada and will talk with Sanju Samson in Malayalam.

Dodda Ganesh, a former cricketer said that DK is being wasted in cricket field. “He should be the ambassador of India to show the plurality of India” he said.

I think DK is being wasted on the cricket field. He should be the ambassador of India to show the plurality of India 😁

Karthick’s Tamil with Varun became famous among the Netizens dueing this IPL season. Even yesterday, while keeping wickets, he said “Sariyaana ball ithu” to Varun when he came in to bowl. Instead of discussing with him ball to ball by walking through the pitch, Dinesh decided to go with this way to keep it themselves without letting the batsmen know about their game plans and strategies. The stump mic which was kept to record the rattle of stumps for the Television audience, is recording Dinesh Karthik’s chatter too.

Sanju Manju Said That He Wants Axar Patel To Play For India Instead Of Jadeja !! Check Replies
Internet Reacts To The Speech Of Anitha Sampath !!
Advertisement