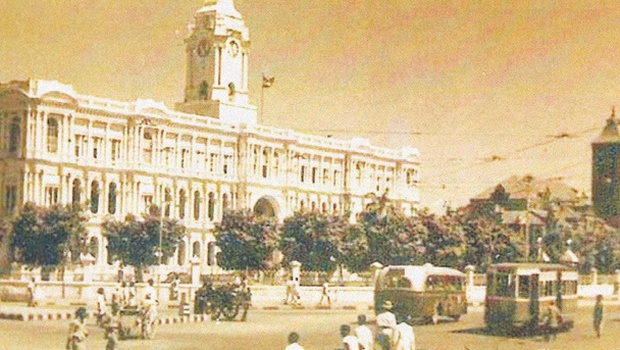 When Chennai Travelled at 7 kmph

a tram near Ripon building : Sourced from Winston Henry

CHENNAI: The fading pages of the Independence Day special edition of The Indian Express contains an advertisement — a motorcycle zooms towards the reader. Behind is a bus and further down, chugging along, is a tram. The dawn of personal motor vehicles had arrived. With speed taking the lead, the slower forms of transport faded away, and today these vehicles that transported over a lakh people a day remain a distant memory for old timers who recount broad streets with walkers, bullock carts, cycles, and the occasional bus or car.

The trams were ‘jogging speed’, as  history aficionado Winston Henry, who collects data on trams, put it. He recalled his uncle, who used to jog beside the trams from his house to school to save ticket money to buy other goodies.

Prabhat, Pachayappa’s, Harbour, Loan Square and Barber’s Bridge — some of the names on the 1/2 anna ticket still exist, others are just echoes of the past. But life itself was slow, people did not own cars and did not mind taking the leisurely route to work.

The electric tram, operated by Madras Tramways Company, ran on five lines. In some places like Purasawalkam, they ran as a single line where the same tram would return. “Since the trams would move both ways, the driver would just move to the rear-end and drive back,” says Winston, who has been collecting tram memorabilia like maps, tickets and photographs in old advertisements.

In many photos, the documentation is indirect — like overhead cables and hooks in buildings where the cables were attached.

A 1/2 anna ticket showing the stages like ‘Pacheappas’
In 2012, the Centre mulled the idea of reintroducing trams in Indian cities as an eco-friendly and cheap public transport option in the light of the oil-crisis, car-centric development and for the vintage element. The Delhi government too had plans of reviving trams that used to serve Chandni Chowk. Although some transport experts believed that trams could be adapted for modern day use, the projects were abandoned because of the massive costs and the time to set it up.

While it may not be entirely logical for a country to bring back trams, the West values heritage, in addition to the will and the money to invest and bring something back, Winston says. “Kolkata, the only Indian city which still has running trams, has a mobile tram museum in an old carriage,” he adds. Smaranika, the museum, is inside a 1938 tramcar and contains tram-related odds and ends.

But none of the Chennai tram cars exist today, with the last of them fading away as trams were discontinued in April 1953 — the system became economically unviable. “There were labour problems and I’ve heard stories of many tram drivers who lost their jobs going house to house asking for money until they found new jobs,” says Winston.

But all that is left now is nostalgia with tickets and  black-and-white photos of khakhi-clad policemen and ‘locals’ sitting in the open carriage and driving past High Court, the Central Station and the Ripon Building, with the empty streets stretching all around.

Triplicane and Washermanpet via China Bazaar

Walking Too Was Transport!

Besides the obvious choices of transport that have almost faded away like bullock carts, rickshaws, walking too was an actual mode of transport. In today’s urban India, it has become a choice between exercising in parks or battling it out against traffic and parked cars. But walking 4-5 km was considered nothing out of the ordinary for old timers. With fewer buildings, less heat, more trees and hardly any pollution, older residents of the city have fond memories of the age when there was plenty of time to take the 5km walk to school every day.

Previous articleForget about FREEDOM 251 – Engineering student from Punjab buys Gold iPhone 5s for just Rs.68
Next articleWhat the ‘i’ in Apple’s iPhone stands for

“They Stopped My Film From Getting Released Because Of Their Personal Problems” – Moodar Koodam Naveen’s Shocking Statements !!