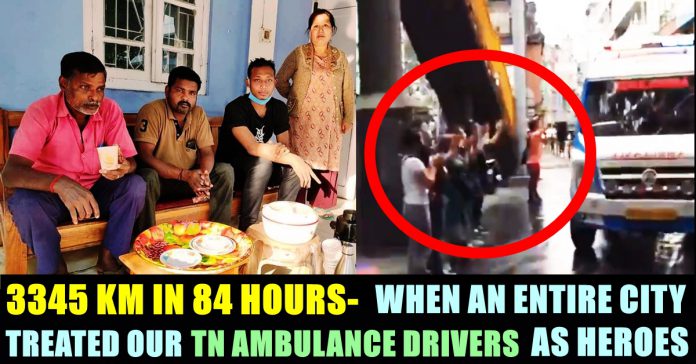 When Chennai Ambulance Drivers Became The Heroes Of Mizoram !!

A 28 Year old youth named as Vivian Remsanga who belongs to Mizoram’s capital Aizawl, expired in Chennai on 23r of April due to heart attack. He was graduated from a Chennai based Hotel management institute in February of this year. His body was found by the Adyar Police.

Due to this Corona pandemic, it is difficult for us step out of our home as government has implemented strict orders. We could also get infected by the deadly virus which killed more than 2 lakh people across the world so far. Irrespective of these hurdles, a two ambulance drivers from Chennai named as Jeyanthiran and Chinnathambi travelled nearly 3,450 kms from Chennai to Aizawl only to make his parents see him for one last time before burying.

Right now Vivian Ramsenga has been laid to rest and it is over. Raphael AVL Malchhanhima is a best friend of Vivian who undertook the journey in the ambulance along with the ambulance drivers. “I am getting so many messages from people. But I just want to say that I did this for my friend and for the people of Mizoram” the 23 year old said who is living in Chennai since 2015.

“Thank you from the bottom of our hearts! You’ve just shown what every Mizo heartbeat means when it comes to the term “Tlawmngaihna”!” wrote Mizoram’s Chief minister Zoramthanga in his tweet of Tuesday to thank the two Tamil drivers.

Thank you from the bottom of our hearts!
You've just shown what every Mizo heartbeat means when it comes to the term "Tlawmngaihna"!@CMOTamilNadu@NDTVTamilCinema#selflessheroes #tlawmngaihna pic.twitter.com/TVwnAQWoTj

The term “Thawmngaihna” which seems to be a “Mizo Code” stands for being hospitable, kind and helpful. “Against all odds! 3000 plus miles of hardship and struggles won’t dampen the spirit of resting the tragic earthly remains of Vivian Remsanga by his friend Rafael AVL Malchhanhima along with Mr. Jeyanthiran and Chinnathambi, both from Tamil Nadu. Mizoram salutes you!” he wrote in another tweet.

Against all odds!
3000 plus miles of hardship and struggles won't dampen the spirit of resting the tragic earthly remains of Vivian Remsanga by his friend Rafael AVL Malchhanhima alongwith Mr. Jeyantjiran and Chinnathambi, both from Tamil Nadu.

People of Aizawl welcomed the ambulance with loud cheers and claps for their kind heart and their selfless act of valuing fellow human’s emotions. By maintaining social distancing norms, people honoured the drivers with traditional shawls, shirts and presented more to the drivers. Videos of the ambulance arriving at Aizawl with loud cheers going viral in social media platforms.

This is how #Mizoram welcomes them real life heroes!

As soon as they arrived, a quick funeral was performed with the presence of the parents at Aizawl. “I have never seen anything like this in my life” says Jeyandiran. “This is the first time here. I have faced many incidents where people would make us struggle to get our basic wages. But it was completely different here. The Chief Minister of Mizoram gave money and gifts personally to us” he said who will be setting off for Chennai on Wednesday.

This selfless gesture from the Ambulance drivers is being lauded by the people across the country.

As the 13th edition of IPL tournament is nearing, all the official twitter accounts of the teams became active and posting tweets to gain...

A video of the owner of Delhi Capitals Kiran Kumar Gandhi seemingly trying to increase the bid amount of fast bowler Khaleel Ahmed and...