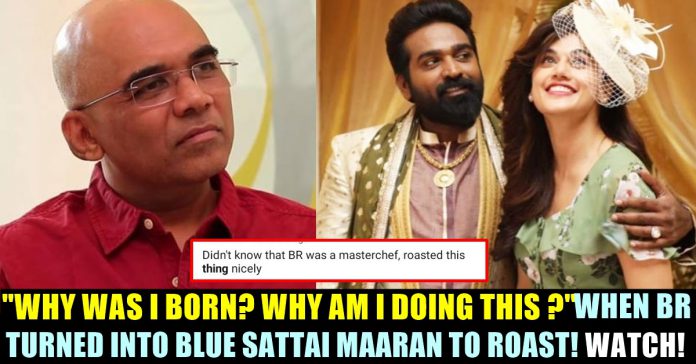 Baradwaj Rangan is known for his show, The BR Review on a YouTube channel. In the show, he reviews all the new releases. He has reviewed the movie Anabelle Sethupathi, which was released on Friday. Vijay Sethupathi and Taapsee Pannu have acted in the movie. The movie is directed by Deepak Sundarrajan. Baradwaj has given a hilarious review to the movie.

Baradwaj has made a sarcastic review. He who has restrained himself from calling Anabelle Sethupathi as a movie and calls it a thing, has made many comments targeting the movie. He has split the movie into two parts. He says the movie is like a mega serial marathon. He also claims that there is no humor in the movie. Baradwaj makes fun of the British accent and also tries to imitate the accent, and also says he has nothing more to say.

People have passed on many comments on this humoristic review of Baradwaj. Ultimately people have called it as a roast rather than a review.

Also there is an official announcement of a sequel to this movie.

Here is how people have reacted to this announcement on Twitter.

Previous articleVideo Of A Man Making Kids To Take Oath On Getting Married Only To Brahmins In Future Received Flak !!
Next article“I Have Miserably Failed In Exams” – Suriya Released Video Pleading Students Not To End Their Lives !! WATCH

JUST IN : “Varisu” Is A Copy Of This Hollywood Film ??

The most awaited first look of Vijay's 66th project got released a day ahead of his 48th birthday. Titled as "Varisu", the poster is...

WATCH : Once Again Asal Kolaar Is In The Receiving End!!

Once again Asal Kolaar caught the attention of Bigg Boss viewers for the physical attachment he shows with the female contestants of the Bigg...